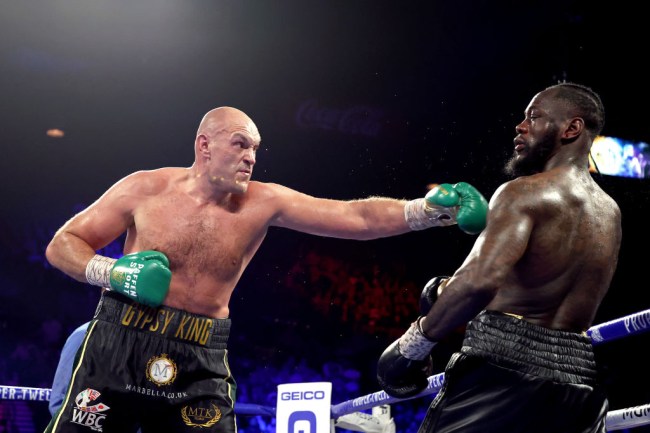 It’s been a few days, and now that the dust has finally settled, the entire landscape of boxing looks so much clearer.

In retrospect, no one should be surprised that a man named Tyson “The Gypsy King” Fury is the best heavyweight boxer in the world. Fury knew it long before he rode into the MGM Grand Garden Arena on a throne carried by a half dozen exotic women. He’s known it for years really, at least since 2015, when he flew to Germany and beat Wladimir Klitschko to win the IBF, WBA, IBO, and WBO titles.

However, last Saturday, “The Gypsy King” finally had a chance to showcase his rare and magnificent talent for the entire world to see, knocking out Deontay “The Bronze Bomber” Wilder to become the WBC world heavyweight champion. It was a performance of legend, and one fit for the one true king.

Fury now sits alone atop the throne of heavyweight boxing. He reasserted himself as the top heavyweight in the world, just months after names like Wilder, Ruiz, and Joshua all had legitimate claims to the crown. Fittingly, Fury won the WBC belt, the only belt he had never previously won, with a career defining performance, in which he redefined his own boxing style. “The Gypsy King” proved that no one’s natural talents and weapons are greater than his own. This is 14 months or so after he already proved that he had the best pure boxing skill and strategy in the division.

Now, I’ll be honest. Heading into the Wilder vs. Fury rematch, I was convinced that Deontay Wilder would find a home for his stunner of a right hand. He landed it in the first fight, finally gauging Fury’s timing and distance in the later rounds. Looking at the rematch as a continuation of the first bout, I figured it would be less than six rounds before Wilder connected with his right.

Tyson Fury basically never gave Wilder the chance to even uncork the straight right, though, smothering the former champ from the get go. Fury bullied his way inside, using his massive size and strength to outmuscle a boxer 40 pound smaller, unleashing his own power. Forgive us all for not realizing the dynamite in Fury’s hands.

What Fury did in the rematch against Wilder is one of the most amazing feats of strategy and boxing IQ the sport has ever seen. And even though everyone doubted Fury’s last minute switch in trainers, questioning his decision to finish his training camp with Javan “Sugarhill” Steward, “The Gypsy King” made everyone eat their words. Everyone.

The biggest fight of my era will be@BronzeBomber ! But ill knock him out!

Taking a boxer known for his footwork, head movement, and riding the jab on the perimeter, and turning him into a bruising knockout artist in a matter of weeks seems like an impossibility. However, when Tyson Fury and “Sugarhill” combined forces, they put together a game plan and strategy predicated on Fury’s size, using every bit of his 6’9” frame, filling it out to a career high 273 pounds.

The size became a big story on weigh-in day, but the weight was only part of the story. It was just an ingredient in the whole recipe. The next day, on fight day, Fury unveiled his instructions on how to beat a fighter who was previously 42-0-1.

I feel a lot better about Tyson Fury weighing 273 pounds today than I did about Andy Ruiz weighing 283 pounds last December.#WilderFury2

The instructions were flawless.

Step one: Throw away everything you’ve ever previously done in the ring and come forward, right at the most lethal right hand on the globe.

Fury, who spent the majority of his career as a perimeter fighter and jabber, a pure boxer who understood defense and footwork, came straight for Wilder, moving right into close range. It’s not as if Fury didn’t already tell the world what he was going to do, we just thought it was part of boxing’s head games, where fighters state their intended gameplan, only to do the opposite. But Fury obliged his best laid plans, and started boxing Wilder up from the start.

Up on the scorecards after the first round, Fury went with the same approach in the second.

The second round may have been the closest frame of the whole contest. One judge even awarded that round for Wilder, but “The Bronze Bomber” looked off before returning to his corner. It was something in his eyes, although Wilder has already gone on record to say that it was something in his legs, on account of walking to the ring while wearing a 40 pound costume.

Heading into the third round, Fury employed steps two and three of his gameplan, although they were really the same as step one. This time, however, he clobbered Wilder with a left hook, followed by an overhand right, straight to the temple. The power shot rocked and shocked Wilder, messing up his equilibrium, sending him to the canvas. The knockdown was major, and from there, everyone could see the beginning of the end.

It took a few more rounds still, and Fury was even docked a point by referee Kenny Bayless for excessive stalling and punching after he tried to separate the two. It was in the same round that Fury landed his second knockdown of the fight, sending Wilder to the ground with a body shot. But the scores would be irrelevant in the end, as Fury sealed the deal in the seventh round.

Now the real question is, what’s next?

In the days since Wilder vs. Fury 2, Deontay Wilder has already stated his intention to exercise the immediate rematch clause. For Tyson Fury, this is not only a no brainer, it’s a contractual obligation. However, heavyweight boxing may be best served if Wilder takes some time off to recover and regroup. This time would allow Fury the chance to pursue a title unification bout against fellow Brit Anthony Joshua. The numbers of that fight would likely be the biggest of any fight the entire sport of boxing can make at the moment.

Fury’s star making performance last week, combined with Joshua’s popularity in the U.K. could easily sell north of 80,000 tickets across the pond. The Pay Per View numbers might be difficult to predict with a U.K. start time, but it’s a massive fight that would only propel the winner to an even higher status.

By comparison, the trilogy fight against Wilder would probably do okay on Pay Per View in the U.S., but could it really top what we saw last Saturday? Millions and millions of people just saw Tyson Fury absolutely destroy Deontay Wilder, beating him so badly that it’s tough to imagine a different scenario in the third fight. And let’s be honest, the viewing public is a lot smarter that promoters give them credit for. The Fury-Wilder trilogy would be a tougher sell than the second fight.

Just as Fury stated that his own performance in the first Wilder fight wasn’t good enough, “The Bronze Bomber” just wasn’t good enough to beat “The Gypsy King,” and he’ll need to take the time to go back to the drawing board to find a path to victory. It’s not something that happens in a month or two. It’s something that would take a year to 15 months, in which time, he can take a few tune up fights to rebuild his confidence and work on new skills. That type of slow build would also allow the public time to see the improvements and welcome Wilder back to the PPV arena, in due time.

And, much like Wilder and Fury both took two fights in between their first and second bouts, raising the profile of the rematch, they should do the same this time around, building their resumes and legacies apart, plotting for a trilogy bout in the future.

For now, promoter types like Bob Arum and Eddie Hearn will have to figure out those details. They’re the ones guiding these careers and steering boxing’s narrative. And while the suits figure out how they’re going to build on the massive momentum Tyson Fury gave to heavyweight boxing last weekend, jump starting the division directly into overdrive, just take another second to recognize that this is the moment that heavyweight boxing returned to the glory of the eighties and nineties, and in most party, it’s thanks to a dude named Tyson Fury.

I mean seriously, can any name really be any more boxing than that?