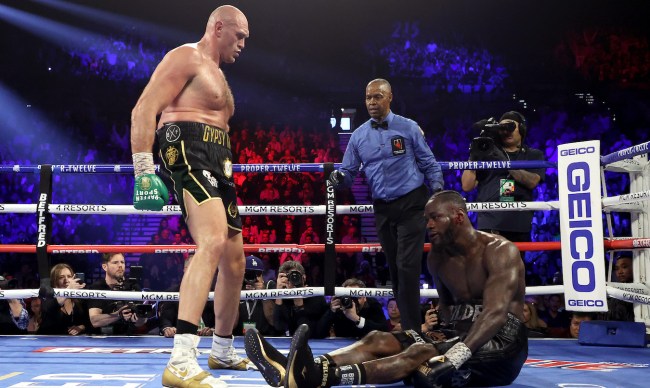 Deontay Wilder, 34, who lost his first career fight on Saturday when he was absolutely dominated by Tyson Fury, says he is “definitely” exercising his rematch clause for a summer trilogy fight against the 31-year-old Fury.

Additionally, Wilder told Lance Pugmire of The Athletic that he believes his legs were weakened by the 45-pound costume that he chose to wear prior to the fight as he walked into the ring.

Full story coming to @TheAthleticBOX shortly: Deontay Wilder @BronzeBomber tells me he is definitely exercising his rematch clause for a summer trilogy against @Tyson_Fury, that his legs were weakened by his 45-pound costume he wore to the ring to honor Black History Month.

Wilder, who had not lost in any of his previous 43 fights, suffered a TKO defeat when his corner threw in the towel in Round 7 at the 1:39 mark. Following the fight, Wilder expressed that he wishes his team had let him keep fighting despite how clearly he was being dominated.

A summer fight between Wilder and Fury would be the third bout between the pair. Wilder vs. Fury I, which took place at the Staples Center on December 1, 2018, ended in a controversial split draw, with the scorecards at 115–111 for Wilder, 114–112 for Fury, and 113–113. Fury then went on to win the rematch at the MGM Grand Garden Arena in Las Vegas on Saturday, February 22.

“The king has returned,” Fury said to the Vegas crowd following the epic victory.