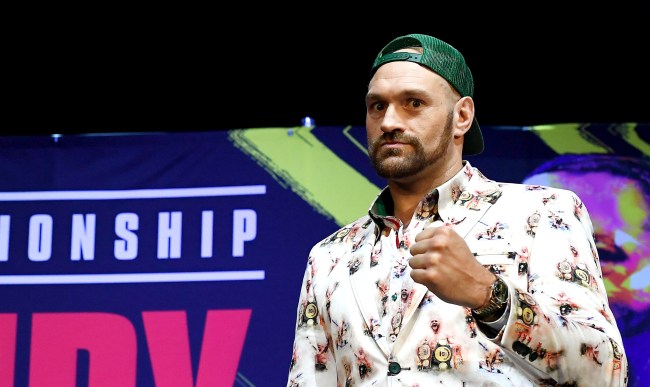 The long-awaited rematch comes over 14 months after the fighters’ incredible, and controversial, heavyweight title fight that saw them go the distance after Fury somehow went full Undertaker recovered from a devasting knockdown in the 12th round of the December 2018 fight.

On Monday, Wilder and Fury held a press confernce in anticipation of their rematch.

“He knows he was rocked three or four times in the last fight and I didn’t have the gas to finish him… This time I can turn that screwdriver until he is gone,” Fury added later.

“You are going to sleep in two rounds,” Fury predicted. “I keep having the same dream about round two, round two. I am playing poker and I get dealt number two, number two.”

Wilder said during one of his turns to speak, “I am prepared more than ever for this fight. I knocked him out the first time. I told Fury two years ago I was going to baptise him and I did just that. Rising up is part of the baptism. I told him he was going to go ‘timber’ and he did just that. This time around it is called unfinished business and he won’t be able to get back up. I am going to knock him out.”

Following the presser, boxing journalist Manouk Akopyan was there with Fury when he was asked how he was preparing for the rematch with Wilder.

His response was certainly not what anyone would have expected.

The 31-year-old Gypsy King also explained his unique suit, did a little singing, and admitted that “he’s uneasy about sparring in fear of opening up the over his right eye that required 47 stitches and jeopardizing the fight,” according to Akopyan.

Tyson Fury said it all today.

Fury also said he's uneasy about sparring in fear of opening up the over his right eye that required 47 stitches & jeopardizing the fight. #WilderFury2 pic.twitter.com/ITWjqAmhEO