One Team Is Reportedly Showing Interest In Signing Deandre Ayton 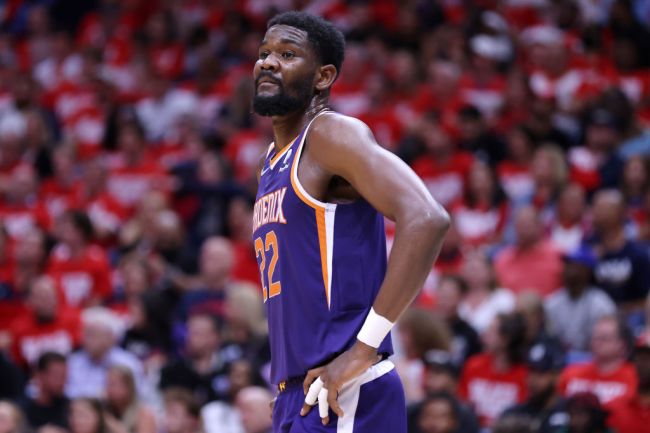 Blockbuster trades have taken center stages during this NBA offseason, which has seemingly distracted fans from the fact that there is still a big name available to be signed in free agency.

Deandre Ayton is currently a restricted free agent coming off of a season where he averaged 17.2 points and 10.2 rebounds per game, but has yet to receive an offer sheet a week into free agency. That could change soon.

According to ESPN’s Brian Windhorst, the Indiana Pacers are interested in either signing Ayton or potentially trying to land him in a sign-and-trade deal involving Myles Turner.

The Pacers are interested in signing Deandre Ayton to an offer sheet or even negotiating a sign-and-trade involving Myles Turner, per @WindhorstESPN.

"But holding everything up is the Suns' negotiations for Kevin Durant. … Ayton may have to move on and do his own deal." pic.twitter.com/cSciehuI1p

Turner would be a slight downgrade for the Suns, having averaged just 12.9 points and 7.1 rebounds per game last season, but also would be a bit cheaper than the contract Ayton will receive this offseason.

For the Pacers, they get a better, younger prospect to build a solid core with alongside Tyrese Haliburton and Buddy Hield.

The Suns will have to hope an offer sheet for Ayton doesn’t come in too soon as they try to acquire Kevin Durant. If Ayton signs an offer sheet, the Suns would no longer be able to trade him, seemingly ending their Durant pursuit.

This interest from the Pacers could put just enough pressure on the Suns to finally pull the trigger on giving the Nets whatever it is they’re looking for in a Durant deal before they can no longer use Ayton as a trade piece.

Otherwise, it looks like Ayton may become the centerpiece of the Indiana Pacers’ rebuild.