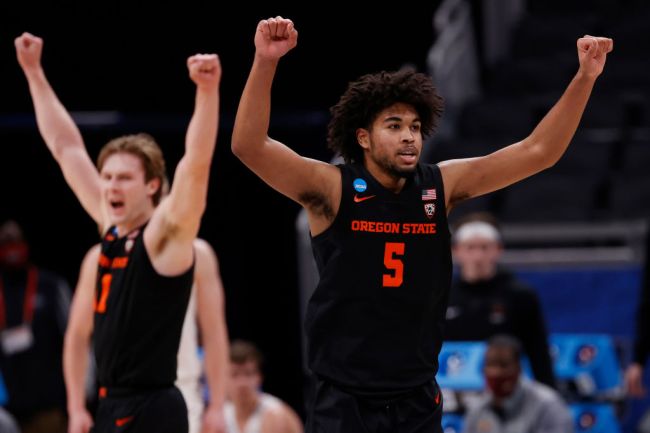 Sister Jean didn’t have another miracle in her on Saturday as Loyola Chicago lost to Oregon State, the hottest team in the country. The Beavers shot 41 percent to advance to the Sweet Sixteen, and they followed it up with another 41 percent shooting performance against the Ramblers. Ethan Thompson led the game with 22 points and continues to put the NCAA on notice.

Things started slow, and the game went into halftime with a combined total of 40 points, but that’s exactly what head coach Wayne Tinkle wanted. Loyola’s offense moves through Cameron Krutwig and uses backcuts to get their other shooters the ball, so Tinkle switched to a 1-2-2 press and an extended zone. His decision ultimately held its opponents to 33.3 percent from the field and won Oregon State the game.

Here's what Oregon State's defense did to Loyola Chicago in the first half:

The defensive pressure had the Ramblers in fits.

This turnover took a lot out of Porter Moser. pic.twitter.com/iXeX53aFwX

With the win, Oregon State becomes only the second 12-seed to reach the Elite Eight after Missouri did it in 2002. The Beavers were picked to finish last in the Pac-12 and finished the regular season with a .500 record. Since then, they have gone a miraculous run that includes wins over six straight tournament teams. UCLA nearly ended the streak before it began, but Oregon State came back from 16 points down to win in overtime.

If UCLA's Jules Bernard had made both free throws with 3 seconds left in the Pac-12 quarters, we would never have heard another word from Oregon State. Instead, he missed one, the game went to OT, and the Beavers have been unstoppable since.

Since then, the resilient group has knocked off Oregon, Colorado, Tennessee, Oklahoma State and Loyola. Oregon and UCLA are both in the Sweet Sixteen. While Tinkle has a lot to do with it, a lot of credit needs to be given to the new 101-year-old on the block. Sister Jean met her match on Saturday as the nation was introduced to Bud Ossey, a WWI veteran who went to school in Corvallis during the 40s.

Oregon State will face either 11-seed Syracuse or 2-seed Houston in the Elite Eight. No 12-seed in the NCAA Tournament has ever reached the Final Four, so Tinkle, Thompson and Ossey will look to make history.