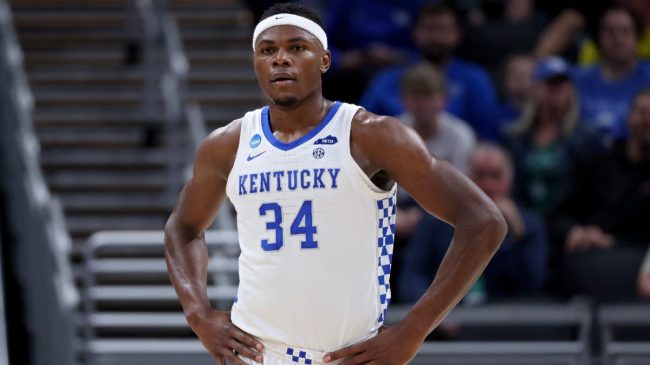 Oscar Tshiebwe was college basketball’s most dominant player last year. The center transferred from West Virginia after two seasons, and wound up in Lexington with Coach Cal.

The big man averaged 17.4 points and 15.2 boards a night on his way to National Player of the Year honors. While many though he’d be off to the NBA, Tshiebwe decided to return after flirting with a professional decision over the offseason.

One reason for his return, many assumed, was NIL.

Players no longer have to take the risk of going pro too early. You can make money in college while continuing to develop your skills for the next level.

But there’s one thing that makes Tshiebwe different than most college athletes. A student visa.

Growing up in Africa, the center used a student visa to play his college ball in the US. That visa prohibits him from profiting off of NIL money in the states.

He’s found a loophole, though, that will allow him to make a boatload this week.

The Kentucky Wildcats are headed to the Bahamas as part of an offseason bonding trip. Tshiebwe isn’t allowed to be featured in any promotional materials in the US, but he can when outside of the country.

The superstar is expected to make upwards of $500,000 this week by signing autographs and starring in promos.

Oscar Tshiebwe grew up in Africa.

Because of his student visa, the Kentucky hoops star can't profit off NIL in the U.S.

But this week, while the team is in the Bahamas, he can.

Tshiebwe stands to earn ~$500K in 7 days, per @TheAthletic, from autographs, ads, and other promos. pic.twitter.com/NH38OSoO8A

When he returned to Kentucky, there were reports that Tshiebwe would land up to $2 million in NIL money. This appears to be the first big chunk of that huge deal.

He and the Wildcats will take the floor this winter hoping to win the SEC and avenge a first-round loss to Saint Peter’s in the NCAA Tournament.