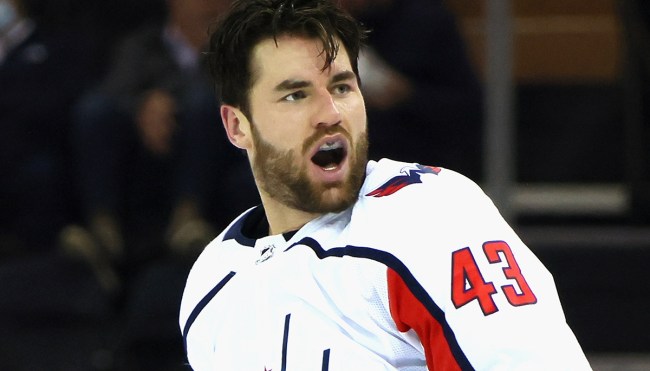 It’s safe to say Tom Wilson has made way more enemies than friends since he played his first NHL game in 2012, as the man fans deemed the most hated player in the league last year doesn’t exactly have a sterling reputation after spending the past nine season cementing his status as one of the dirtiest players in the league.

Wilson—who routinely finds his name near the top of the list of guys who’ve logged the most penalty minutes over the course of each campaign—has been suspended a total of five times over the questionable hits. Similar plays have also led to him being fined on three occasions, including one that resulted in the Rangers being ordered to fork over $250,000 due to the response the team issued after learning Wilson was only hit with a $5,000 fine for slamming Artemi Panarin’s head into the ice during a scuffle.

The forward’s history played a role in the NHL’s decision to hand him a 20-game suspension after Wilson blindsided Oskar Sundqvist with a hit to the head during a preseason game in 2018.

That sentence was reduced to 14 games after Wilson appealed, and he got one hell of a welcome during his first contest back after Marcus Foligno challenged him to drop the gloves during a showdown between the Wild and the Capitals.

There was no way to know exactly what sparked that donnybrook (the list of possible reasons is fairly endless when Wilson is involved), but now, we might have an explanation based on a story Sundqvist shared on a recent episode of the Cam & Strick Podcast.

The Swedish center who currently plays for the Red Wings said he has no real recollection of the hit (which he acknowledged Wilson eventually apologized for after the two men faced off for the first time following the incident).

He also recalled the conversation he had with Marcus Foligno after returning from the injuries he suffered, as he was informed the Wild winger took exception to the play on his behalf.

I think it was my first game back. It was against Minnesota. I’m lining up for the first faceoff and it’s Foligno next to me. He goes, ‘Such a bulls—t hit. I’m gonna take him for you. Don’t worry, buddy.

The next game against Washington, he fought him right away.”

I rarely used the words “respect” and “Tom Wilson” in the same sentence, but props to him for managing to do something so dirty that it made a guy who doesn’t even play on the same team as the victim decide to fight him.