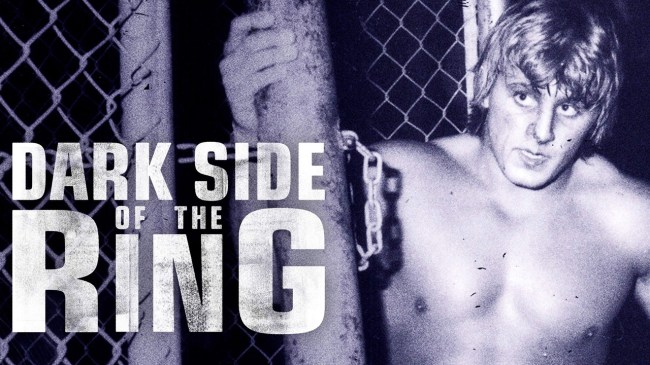 On May 23rd, 1999, WWE superstar Owen Hart, a member of the legendary Hart wrestling family, fell 78 feet to his death during the company’s Over the Edge pay-per-view event.

The youngest of 12 children of Stampede Wrestling promoters Stu and Helen Hart was attempting to enter the ring from the rafters of Kemper Arena in Kansas City using a harness and line when something malfunctioned and he plummeted to his death after landing chest-first on the top rope.

With Vice TV now airing Dark Side of the Ring: The Final Days of Owen Hart, the last episode of season two, Owen’s wife Martha did an interview with Matt Aguilar of Comicbook.com to discuss those final days and how she feels about that whole situation 21 years later.

“I wrote a book in 2001 that really details everything that happened with my lawsuit against WWE, how they were so terrible on every level,” Hart told Aguilar. “I also understand not everybody’s going to read my book. I think with having a visual like the Dark Side, people will get a sense of why I don’t want to have any relations with this company. Unfortunately, we don’t get into it enough, and I’ll tell you that it’s such an ugly story that first of all, when you go right back to the incident, when this happened, Owen died in the ring, and they just scooped him out like he was a piece of garbage and they sent match after match into a ring that not only had Owen’s blood on it, but it was broken.

“The boards underneath were broke from Owen’s fall and the wrestlers could feel the dip in the ring and that was the first, right out of the gate, the disrespect that they showed for a human life. And then on top of it, when I was suing them in Missouri for the wrongful death, WWE actually sued me, the widow, because they wanted the case moved to Connecticut. Because in Owen’s contract it stated that any lawsuits against them should be taken up in Connecticut because they never have punitive damages awarded in Connecticut. And they thought that they were going to be put through the ringer if the case goes through Missouri because of the punitive damages clause.”

Now, however, Hart says she’s made some peace with those she feels let her down when Owen passed away.

“At the end of it all, I’ve forgiven all of them, really,” Hart told Aguilar. “The Hart family, Vince McMahon, I don’t hold any grudges. I hope life has been kind to all of them. My life hasn’t been easy, and I certainly wouldn’t wish harm on anyone. I don’t have a relationship with [the rest of the Hart] family. That said, if I see them on the street or at an event, I’m always polite. I tell my kids to be polite and respectful, but the problem is with once you break the trust in a relationship.

“I’m really sad they couldn’t find the strength to support me. It’s unfortunate that they put their own self-interests above the welfare of me and my kids and getting justice for Owen. That’s unfortunate, but it can’t be changed and is what it is.

“Some damage in life is irreparable. You can’t fix it. It’s done. Again, you can forgive people, but it doesn’t mean you have to befriend them and be associated with them. At the same time, I don’t wish them any harm, and I hope their lives turned out well. That’s the casualties of war. They made their choices and have to live with them. Part of that is not having a relationship with me or Owen’s children. That was their choice, not mine.”

While she may have forgiven them, it doesn’t mean she’s at all interested in Owen Hart ever being inducted into the WWE Hall of Fame as many, many fans have been clamoring for years to happen.

“There’s always been this talk that, ‘Oh, we want to put Owen in the Hall of Fame.’ Their Hall of Fame?” she said. “They don’t even have a Hallway of Fame. It doesn’t exist. There’s nothing. It’s a fake entity. There’s nothing real or tangible. It’s just an event they have to make money. They put it on TV and have a celebration, and it’s just so ridiculous. I would never even entertain it. It’s garbage.”

She does have a point there. There is no actual Hall of Fame.

Martha also spoke to The Wrap about Owen and stated that his brother, WWE Hall of Famer Bret Hart, turned his back on her and her family when her lawsuit threatened to cost him his WWE wrestling footage.

Bret has since responded by stating, “While I am not interested in engaging in any more media mudslinging between Martha and myself especially in light of a global pandemic, I will say that our fallout is multifaceted. To say that it only involved being able to access and use my WWE footage and photos for future projects would merely be an oversimplification and inaccurate. I will not comment any further on the matter.”

WWE lawyer Jerry McDevitt also responded to the recent allegations made by Martha to CBS Sports where she said the WWE “didn’t have any regard for Owen’s life whatsoever.”

“When Owen died, they scooped him out like a piece of garbage and they paraded wrestlers out to wrestle in a ring that had Owen’s blood, where the boards were broken from Owen’s fall and where the guys could feel the dip in the ring from where he fell,” she said. “Just that disrespect and lack of respect for a human life that had just been lost. The fact that they didn’t stop the show is just appalling. Vince McMahon was a poor leader, and he failed because that talent was looking for leadership and he failed them.”

In his response to Martha’s statements, McDevitt wrote to CBS Sports, “The reality is, we’ve never told our side of the story of what happened — at least not outside of court. We told it in court, but when she talks about the way the lawsuit unfolded over the years, it really isn’t accurate what she’s saying. What she did whenever this happened is, she hired a lawyer in Kansas City who we caught essentially trying to fix the judicial selection process to get a judge that was more to their liking. We caught them and went all the way to the Missouri Supreme Court. The Missouri Supreme Court said, ‘No, no, no. We’re not going to let that happen.’ They essentially appointed an independent judge to come in from outside of Kansas City to oversee the proceedings. We were basically trying to find out what happened that night. Martha was not even remotely interested in finding out what happened that night; she just wanted to use it as a vehicle to beat up a business that she didn’t like that her husband was in, the wrestling business.”

21 years later and the death of Owen Hart is still as controversial as ever.

“In response to Jerry McDevitt’s recent comments I want to make it very clear, if there was one person on this planet who wanted to get to the bottom of what happened to my husband Owen it was me!” her statement said. “The defense on the other hand was doing everything in their power to muddy the waters (as they try to continue to do) in an effort to detract from the case because they didn’t have one. I read every single affidavit taken, sat through endless face-to-face depositions, and spent over a year of my life dissecting every solitary fact of this case.

“To insinuate for one second that I of all people did not care about the truth behind Owen’s death, but instead was more interested in a ridiculous vendetta against the wrestling business, is beyond the pale. Jerry McDevitt’s comments are absolutely absurd, reckless, and pathetic. I am not surprised that the WWE would trot out Mr. McDevitt to do damage control.

“After all the events surrounding Owen’s death and the aftermath that followed are extremely disturbing and do not reflect well on their company. Not to mention that Linda McMahon was the acting CEO of the WWF (now WWE) at the time of Owen’s death, which does not bode well for them either, especially given her ties to President Donald Trump and his administration.

“At the end of the day truth has always been my defense and for anyone who seeks it regarding this case and the events surrounding Owen’s death I suggest they read my book. It is all in there.”