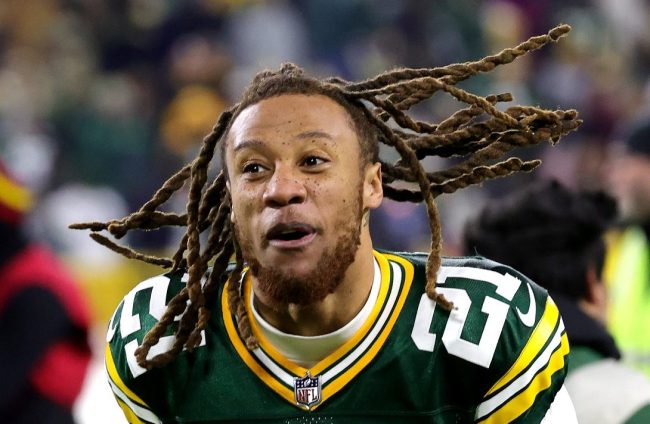 The Green Bay Packers and New Orleans Saints got into a little tiff during their joint practice. It all started when Eric Stokes and Jarvis Landry started going at it. Fights tend to happen during this time of the year but usually, we don’t get a reason why they break out. After the scrum, Stokes reveals the true reason he squared up with Landry.

According to Ryan Wood, the Packers cornerback felt disrespected by Jarvis Landry. Eric Stokes claims that the Saints receiver “tried to big boy” him after the whistle. From there, he got into Landry’s face and a little brawl erupted between Green Bay and New Orleans.

#Packers CB Eric Stokes said Jarvis Landry "tried to big boy" him after whistle, "and I wasn't going for that." Hence, the fight.

Additionally, Eric Stokes feels comfortable with his teammates having his back. He goes on to say the Packers’ defense will ride together no matter what. That’s the exact type of thing the fans want to hear. Green Bay is shaping up to have one of the best defenses in the league. As long as this fire stays ignited, this defense should be a problem. No wonder they backed up Stokes immediately after he felt disrespected by Jarvis Landry.

Eric Stokes on entire #Packers D having his back in the fight: “Oh, I know that for a fact, that we’re going to ride. That’s something that we talk about on the daily. It doesn’t matter who it is, what type of thing we’ve got going on. If one need it, we’re all going to ride.”

The preseason matchup between the Packers and Saints should be a fun one after having an intense joint practice. Both squads are looking like solid playoff contenders for the upcoming season.