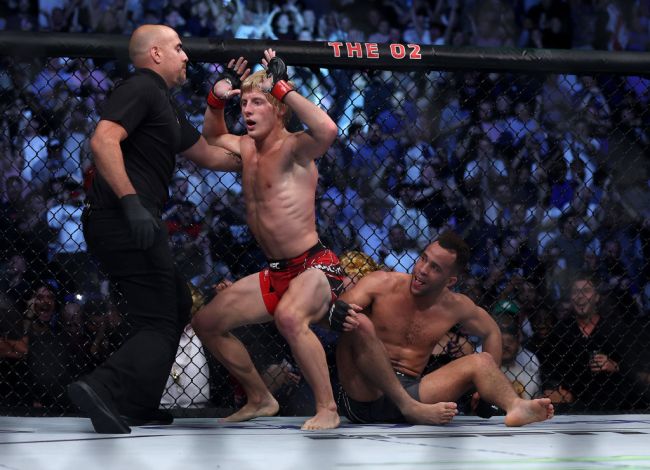 Heading into today’s UFC Fight Night: Blaydes vs Aspinall, fans weren’t quite sure what the fight between Paddy Pimblett and Jordan Leavitt would look like, but they new for sure that they would see a memorable celebration no matter who won.

During fight week, Jordan Leavitt claimed that he was going to finish Pimblett, twerk, and go home.

Paddy Pimblett responded to that prediction with a celebration prediction of his own. Pimblett said he was going to tea bag Leavitt after beating him like he was playing Call of Duty.

"I'm going to tea-bag him like it's Modern Warfare 2"

Paddy Pimblett vows to tea-bag his opponent Jordan Leavitt who said he will twerk after defeating the Welshmanpic.twitter.com/FnCAYHBRU0

Early on in the actual fight, there wasn’t much for either man to celebrate. The fighters spent most of the first round stalled against the fence as Leavitt tried to take Pimblett down. Pimblett founds some success very late in the round as he scored a takedown of his own and landed some ground and pound as the round ended.

In round 2, Pimblett really found his opening. After landing a big knee in the clinch, Paddy was able to work his way to Leavitt’s back. He quickly locked on a body triangle and trapped one of Leavitt’s arms while he was locking it arm. That left Leavitt with only one arm to defend himself and Pimblett easily slapped on a rear-naked choke for the submission win.

After getting the tap, Pimblett followed up on the promise he made before the fight.

Expect to see Pimblett take a big step up in competition in his next fight after he has secured wins by finish in each of his first 3 UFC fights.