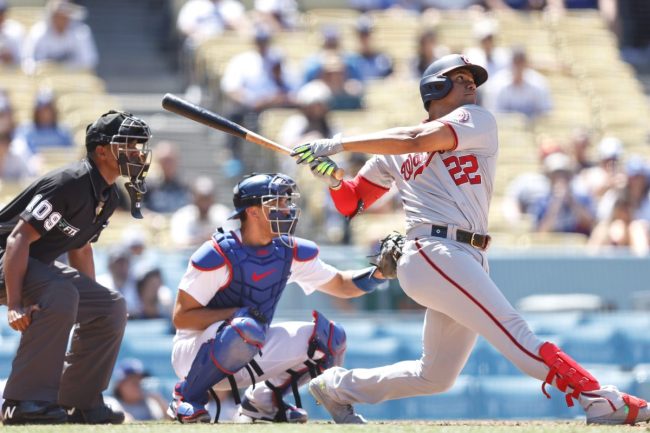 The San Diego Padres are said to be the leader in the clubhouse when it comes to the Juan Soto sweepstakes. The trade deadline continues to near, with the final day to make a move coming on August 2nd.

The Nationals have let it be known that they’re shopping the talented outfielder around the league. This, coming after the superstar turned down a $440M offer to remain in Washington.

Soto is hitting .243 this season, amassing 20 home runs and 45 RBIs. He’s led the league in walks since the start of 2021 and has recorded an on-base percentage of .400 or better in every one of his five MLB campaigns.

But he’ll soon be on the move, and there are plenty of suitors. The Yankees, Mets, Cardinals, and Dodgers have all been involved in trade conversations, but according to MLB insider Buster Olney, Major League executives believe the Padres have the best chance to land the lefty.

That news certainly has San Diego fans excited about the possibility of a championship.

The Padres’ lineup would get a huge boost with the addition of Juan Soto. They already boast slugger Manny Machado, and they’ll soon get Fernando Tatis back after the outfielder suffered an offseason injury.

Getting Soto would give the team a three-headed monster in the middle of the order with the playoffs quickly approaching.

At the moment, San Diego sits at 55-45 while holding one of the wildcard spots in the National League. The Padres have never won a World Series, but they’re hoping it will be possible by adding Soto.

And what a lineup that would be.

If done, this would be the possible Padres's lineup:

Of course, some Padres fans are still skeptical. They also believed they were going to land Max Scherzer before being spurned for the Dodgers.

Padres fans gonna be in shambles again when Soto becomes a Dodger 💀 https://t.co/IqxQwztnkQ

Soto to the Dodgers confirmed. https://t.co/bDItNukBvs

i’ve seen this before https://t.co/dRuLN1q3A2

I don’t believe you https://t.co/YlbcXp2aVe

We’ll see if the Padres can land the slugger. If so, they’ll be a dangerous team come playoff time.