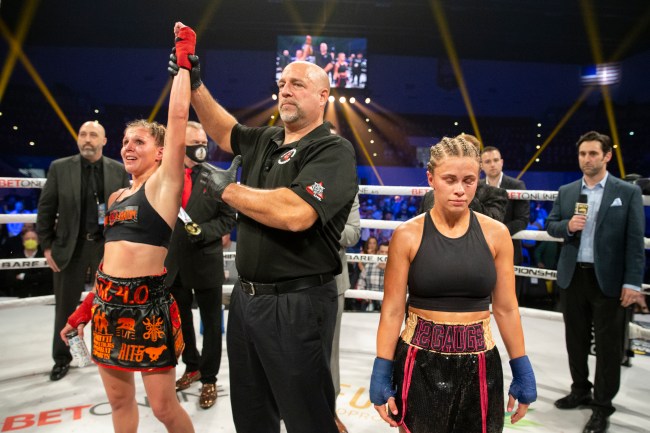 Paige VanZant made her highly-anticipated Bare Knuckle Fighting Championship debut on February 5 at Knucklemania, losing in an unanimous decision to veteran fighter Britain Hart, who the world found out is actually not a human being but a feeling.

Britain Hart is not a person pic.twitter.com/blukf8DWP9

The 26-year-old VanZant planted seeds of doubt about sticking with a BKFC organization she signed a “multi-million dollar” deal with in August when just weeks ago she revealed that the ‘door is definitely open‘ with the WWE.

It’s now being reported that VanZant will be returning to the patented “Squared Circle” BKFC ring this summer, looking to secure her first win in a sport Shaq dubbed “the future of combat sports.”

“I really take my hat off to her because she didn’t have to do this,” BKFC Founder Dave Feldman told MMA Fighting. “Now I take my hat off to her even more because she definitely doesn’t have to do this again. She’s doing it and she really wants to prove herself and that’s the kind of person that I want to be in business with, the kind of person I have a lot of respect for. So I can’t wait to see what she’s going to do.”

Feldman claims VanZant’s next opponent is another “well known name” in the combat sports world.

Here is VanZant talking on our Endless Hustle podcast about her decision to join Bare Knuckle and why the sport isn’t as dangerous as it looks.

.@PaigeVanZant tells us about her decision to join @bareknucklefc & debunks the misconception of #bareknuckleboxing being misrepresented as more dangerous than MMA during Episode 26 of #EndlessHustle.