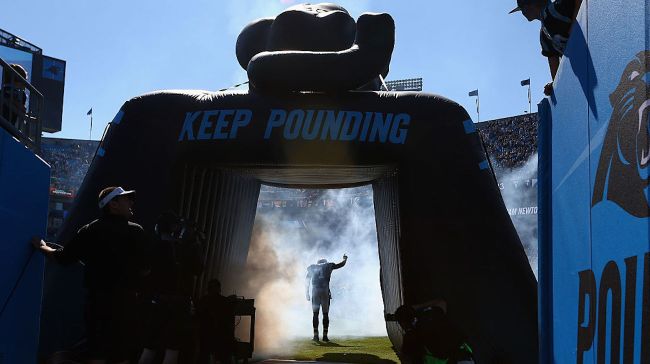 With Deshaun Watson now a member of the Cleveland Browns, Baker Mayfield’s time as the team’s starting quarterback has likely come to an end despite the fact that he led the team to their first playoff victory since the 1994 season.

Still just 27-years-old, there are likely a few teams in the NFL interested in giving Mayfield another shot to be an effective starter, with the Carolina Panthers emerging as the favorite to acquire the controversial QB.

Carolina Panthers reportedly have “inside track” on Baker Mayfield

The Panthers apparently hope to corner the market on top-three draft picks from 2018 who play quarterback and who are due to make $18.8 million in 2022. Mary Kay Cabot of the Cleveland Plain Dealer reports that the Panthers have “the inside track to land” to land Browns quarterback Baker Mayfield.

The report raises more questions than it answers, especially since it mentions that there are “several interested teams,” but doesn’t name any of them. [ProFootballTalk via the Cleveland Plain Dealer]

Having just traded for New York Jets castoff Sam Darnold last offseason, it’s perhaps surprising to see the Panthers considering a similar move this year — Mayfield and Darnold were both taken in the 2018 NFL Draft.

Selected with the first overall pick in the 2018 NFL Draft, the former University of Oklahoma star has been a starter in Cleveland virtually every year since, starting a total of 59 regular-season games. During his NFL career thus far Mayfield has completed 61.6% of his passes for 14,125 yards, 92 touchdowns, and 56 interceptions. The former OU Sooner has struggled with turnovers in his first four seasons, as he also has 27 fumbles (12 lost) to go with his 56 picks.

RELATED: Baker Mayfield Gets Blasted For Saying He Wants To Go Boo Fans At Their Jobs And ‘Make Them Crumble’