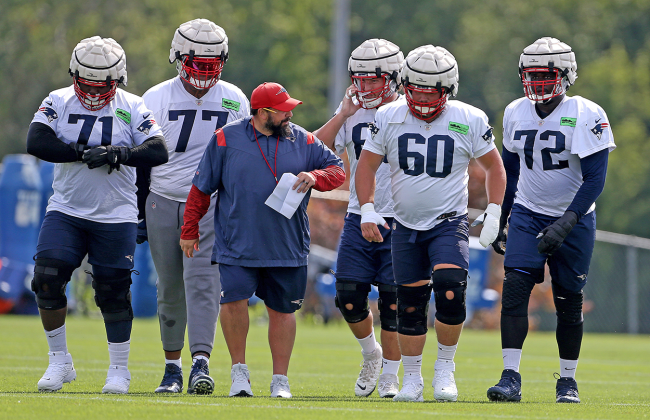 It did not take long for things to get chippy between the Panthers and Patriots on Tuesday. Shortly after the team portion got underway during Carolina and New England’s first joint practice before their preseason game on Friday, a massive brawl broke out and players were ejected.

And it wasn’t the only fight of the day.

Things first got testy after Patriots wide receiver Kristian Wilkerson was tackled and it led to both sidelines clearing to get involved in the brawl. It started with pushing and shoving before escalating to punches being thrown.

HUGE fight taking place, started with shoving and ended with a lot of punches being thrown. Both fields were cleared. Chaos in Foxboro. pic.twitter.com/BU2YrzEVAE

After the two sides were separated, Wilkerson and Kendrick Bourne were cut loose for the day along with Carolina safety Kenny Robinson. They were sent to the showers early.

With tempers seemingly cooled, practice got back underway. But it didn’t take long for another fight to break out between Patriots offensive guard James Ferentz and Panthers defensive tackle Phil Hoskins.

2 fights in 5 minutes at Patriots Training Camp with Panthers pic.twitter.com/QQPD4tW1Z6

Even though things were resolved much quicker than the first fight, the two linemen were also kicked out. Patriots head coach Bill Belichick then called his team over and gave them a stern talking to.

Bill Belichick brought the Patriots together for a long huddle after the latest fight. Likely telling them to stop with the nonsense.

While fighting is to be expected during training camp, especially as players get to hit someone that isn’t on their team for the first time, it slows things down.

Nobody wants that. The coaches need their players on the field so that they can get proper reps and preparation, so fighting will not be tolerated— as we saw with the ejections on Tuesday.

Carolina and New England will have another full day of joint practice on Wednesday and then will take Thursday for walk-throughs before their game on Friday. It’s going to be tense.