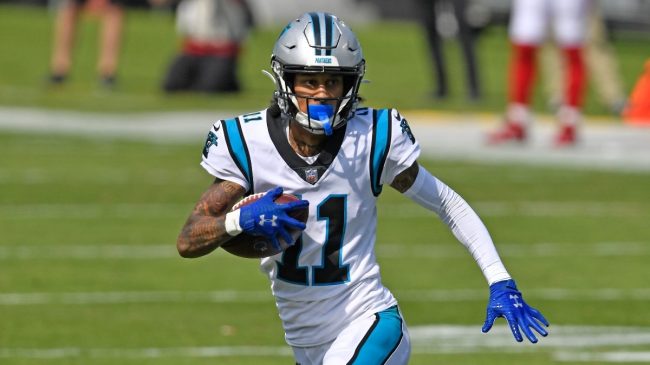 The Carolina Panthers are a complete mess right now as the franchise faces major changes. After firing Matt Rhule, the front office is now open to trade talks regarding several players. One of which is wide receiver, Robbie Anderson. He may have shown the organization he wants to be traded after being seen arguing with a coach during Sunday’s game.

It’s early in the contest as Carolina holds a 10-7 lead entering halftime. However, all eyes are on Anderson right now as he got into an altercation with a coach. It’s unclear what was said, but the Panthers receiver clearly wasn’t happy.

Robbie Anderson exchanging some words with his coach pic.twitter.com/RaswG5R97G

This isn’t a great look for Robbie Anderson, especially with trade rumors swirling about. On Saturday, it was reported that the Panthers are open to trading Anderson and superstar running back Christian McCaffrey, per Adam Schefter.

Carolina also appears unwilling to trade defensive stalwarts Derrick Brown and Brian Burns, despite interest that they have generated around the league. One player the Panthers are open to moving, according to sources, is wide receiver Robbie Anderson.

He hasn’t been the best wide receiver since arriving in Carolina. However, openly arguing with a coach on the sideline could be enough to deter any trade interest. Additionally, Robbie Anderson isn’t winning over any of the fans, as they are completely done with seeing Anderon playing for the Panthers.

Ready for Anderson to get off this team.

The trade deadline is quickly approaching. So the Panthers could make a move soon.

And after all of that, it looks like the veteran wide receiver is completely done with being in Carolina. Although the Panthers are within reach, Robbie Anderson is now sitting by himself away from his teammates.

#Panthers Robbie Anderson is sitting away from the rest of the WRs on the sidelines.

The team is reportedly actively shopping him around the league. pic.twitter.com/RSvawGGhYk

The writing may very well be on the wall as nothing about this situation looks great for Robbie Anderson.