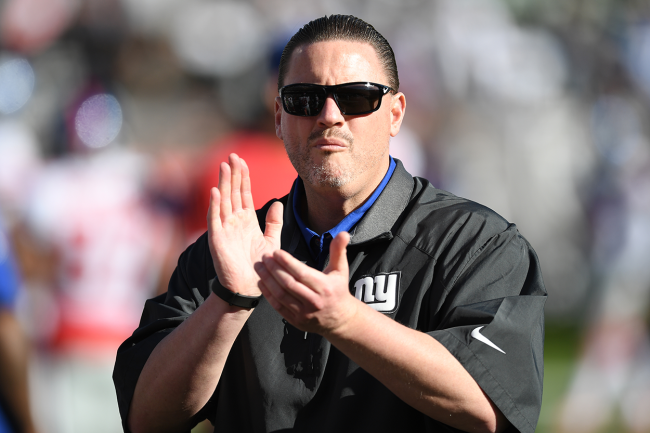 The Panthers have four options at quarterback: Sam Darnold, Baker Mayfield, P.J. Walker and Matt Corral. To get to this point, Carolina has spent a significant amount of NFL Draft capital and still does not have an answer at the position.

The entire situation is completely chaotic and the team plans to hold a quarterback battle this summer to determine the starter.

However, neither option was desirable to the team’s offensive coordinator in 2018.

Ben McAdoo was hired by the Panthers during the offseason. Prior to his new role, he served as a consultant with the Cowboys in 2021, as the quarterbacks coach with the Jaguars in 2020 and as the head coach of the Giants in 2016 and 2017.

During that three-year gap in his resume, after being fired by New York, McAdoo was unemployed. With time to kill and a desire to stay close to football, he took it upon himself to scout the 2018 NFL Draft quarterback class.

That class included Darnold and Mayfield, who will battle it out for the starting job this summer.

In an article from the New York Post, McAdoo spoke about the 2018 quarterback class. He rated Josh Allen as his top guy, which proved to be true, but was not enamored with the others.

“I think the kid the Jets drafted has a lot of magic in his game,’’ McAdoo said to the NY Post. “I think he’s special. He’s obviously a talented guy, he can make plays with his feet. I’d just have a hard time drafting a guy in the first round where you don’t necessarily like the way he throws.

“He can overcome it, guys have, but that’s something that’s a challenge for me. I’m gonna be looking at that, trying to fix it, because it’s a fundamental flaw, and I believe in the fundamentals. The quarterback, his No. 1 job is to pass the football. If I don’t like the way he throws the ball, I have a hard time picking him, right?’’

While there was some positivity in his comments, McAdoo’s comments were not a particularly strong endorsement for Darnold. He had him ranked third in the 2018 class behind Allen and Lamar Jackson.

Ben McAdoo was confused by the Browns’ decision to draft Baker Mayfield No. 1 overall.

“He’s got an edge to him, I like that. He’s gonna lead, they’re gonna follow him,’’ McAdoo said of Mayfield to the NY Post. “I didn’t see a lot of pro-style football in his college tape. And if you’re short you have to be able to make up for it some way, somehow, and personality doesn’t do that. I didn’t think he was a great athlete. This guy is kinda like a pocket quarterback that is short and with small hands, that’s what I worry about.’’

Now, as McAdoo enters his first year as a coordinator or head coach since 2017, and only his fifth year serving in either role throughout his entire career, he has to make a decision on whether to start Darnold or Mayfield (or Corral or Walker. He was not particularly keen on either guy in 2018. Awkward.