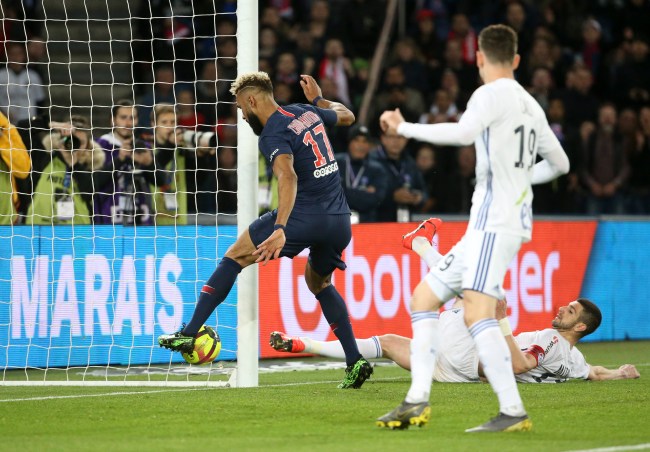 Eric Maxim Choupo-Moting is a professional soccer player. He makes a lot of money to play for Paris Saint-Germain, as last summer he signed a two-year contract worth £13.5 million. He also made one of the weirdest, most frustrating blunders you’ll ever see on a soccer–sorry *football–field.

Late in the first half during Sunday’s Ligue 1 match against Strasbourg with the score tied at 1-1, Choupo-Moting, who was starting the match in the place of star Kylian Mbappe, cock-blocked teammate Christopher Nkunku from scoring a goal by failing to spectacularly to tap the ball into the goddamn net.

Why do I keep watching this and thinking the ball will go in? Oh, because it’s literally the easiest goal scoring opportunity since I wore my high school letterman jacket around the mall as a 30 year old.

😳 We're not exactly sure what Eric Maxim Choupo-Moting was doing here⁉️ The @PSG_English man denied his own teammate and left the ball sitting on the goal line. pic.twitter.com/blFnaPoOQA

“I wondered if I was offside and it all happened very fast. I touched the ball, it hit the post and, well, it’s a real shame because the ball was going in. Sorry about that,” Choupo-Moting said after the game.

Paris Saint-Germain would go on to tie Strasbourg 2-2 and the blunder prevented PSG from celebrating its sixth Ligue 1 title in seven seasons. Choupo-Moting shouldn’t be too hard on himself, as he put PSG on the board early in the first half.

After the game, Kylian Mbappe posted on social media lifting his teammate up.

“Big up to Choupo-Moting. I have missed a lot more than you have this season, we stay united as a group and we will support you until the end.”

Where does Choupo-Moting’s miss rank on the all-time list of awful blunders? These two are pretty bad.

Hey @espn — maybe a nominee for "Not Top 10." pic.twitter.com/DRpebereG0

Huge respect to Estonian side Paide Linnameeskond who managed to go 1-0 down within 14 seconds, without the opposition touching the ball. pic.twitter.com/sPncb1wSph