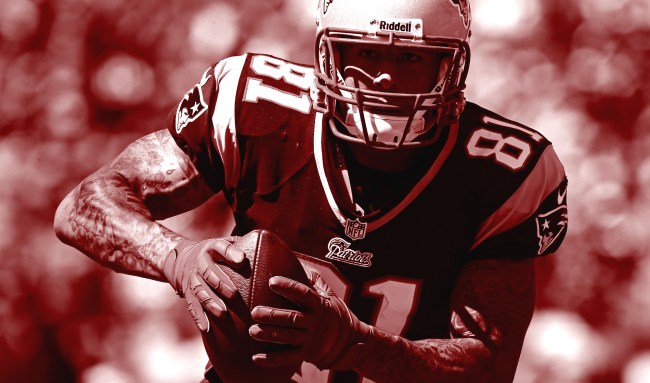 Former Pro Bowl punter Pat McAfee, who was playing in the lNFL eague when former Patriots tight end Aaron Hernandez was arrested for murdering Odin Lloyd, talked about the new documentary on Netflix, Killer Inside: The Mind Of Aaron Hernandez, during his show on Thursday.

What he had to say about both the documentary as well as Hernandez and the time he was in the league at the same time with him, it’s utterly fascinating.

McAfee added, “To be able to just murder people in cold blood and then place that aside and play in an entire league, an entire game, an entire whatever, and make 40 million dollars it’s just absolute insanity.”

“I mean I was in this world, I was in the NFL,” said McAfee. “The conversation about Aaron Hernandez, whenever this all came out, in the locker rooms was WILD.

McAfee then went through more of his thought process as he watched the limited series.

“There was a chance that I dapped up Aaron Hernandez after a game, like I’m not a hundred percent certain I did but there is a chance that me and Hernandez dapped each other up,” McAfee added. “In that hand, that I dapped up with after a game, I think we might have beat them at that particular time or or lost one of the other, it was potentially just holding a revolver just emptying it into a car and then waking up the next morning and going and working out and going into a football facility and acting like nothing happened. That is such a sad, sad, sad story.”

“You’re just talking about a human that was walking amongst other humans, walking amongst elite humans, Tom Brady, showering next to Tom Brady at like 4 o’clock in the afternoon and then at 2:00 am he was out at a club doing like 50 cent shots, getting upset and emptying an entire revolver into a car, going back to bed, waking up the next morning, playing catch with Rob Gronkowski and then put that on repeat for the next couple years,” McAfee said with disbelief.

McAfee also made another point that pretty much anyone who watched the documentary will probably agree with, “I would argue that Aaron Hernandez’s mother is probably top five worst moms of all time.”

As far as what players on the Patriots knew about Hernandez before his arrest, McAfee said, “It felt like the players though had no clue. Like, I think the players knew that he was you know maybe, maybe did the dope, you know, maybe he smoked the dope, and things like that, but I don’t think they had any clue that they were living amongst a gangster.”

The documentary also appears to have had an effect on how McAfee, a former NFL player, views CTE, “I think we in the world make CTE jokes on a regular basis. I think after watching that docuementary and I will not do it anymore.”

Check out his entire take on the documentary below. It’s good stuff.