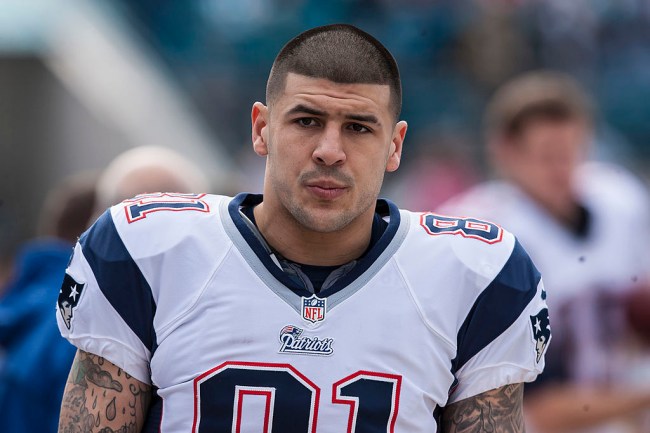 You have to possess a certain type of mentality if you want to make it in the NFL thanks to the inherently brutal nature of football so it’s not exactly shocking the league has found itself home to a number of players who seem to relish the violence of the sport.

Guys like Vontaze Burfict, Bill Romanowski, and Ndamukong Suh have all appeared to take great joy in inflicting as much bodily harm as possible on their opponents (or, in Romanowski’s case, his own teammates) while having literally zero remorse for their actions.

However, you could argue none of those guys have anything on the likes of Ray Rice, Greg Hardy, or Michael Vick, all of whom found themselves at the center of attention (and at the receiving end of suspensions) thanks to their violent tendencies off of the field.

With that said, there’s one player in particular who surpasses all of the aforementioned names when it comes to mastering the art of psychopathy: Aaron Hernandez.

Based on the stories we’ve heard from his former teammates, it wasn’t exactly a secret that the tight end was a temperamental wild card with an incredibly short fuse, and while Urban Meyer warned Bill Belichick he was a liability ahead of the draft in 2010, that didn’t stop the Patriots from picking him up in the fourth round.

The team was largely willing to overlook his erratic behavior thanks to his ability to contribute on the field, but in 2013, things took one hell of a turn when Hernandez found himself at the center of a murder investigation after he was linked to the shooting of Odin Lloyd in what would become one of the most bizarre sagas in NFL history—a saga that’s now getting the documentary treatment courtesy of Netflix.

Killer Inside: The mind of Aaron Hernandez. From the studio that brought you Making a Murderer and Evil Genius, witness the rise and fall of the infamous athlete Aaron Hernandez. How can someone who had everything throw it all away? January 15, only on Netflix. pic.twitter.com/tak2JAwXj5

According to Rolling Stone, the streaming platform will be releasing a three-part docuseries titled Killer Inside: The Mind of Aaron Hernandez on January 15th that promises to examine the life (and unexpected death) of the tight end.

The series will feature unseen footage from the multiple trials Hernandez found himself at the center of following his first arrest, recordings of his phone call from prison, and interviews with people who knew him and the man he was convicted of killing.

Strap in, folks, because if the other documentaries the studio behind this one has produced is any indication, we’re going to be in for one hell of a ride.