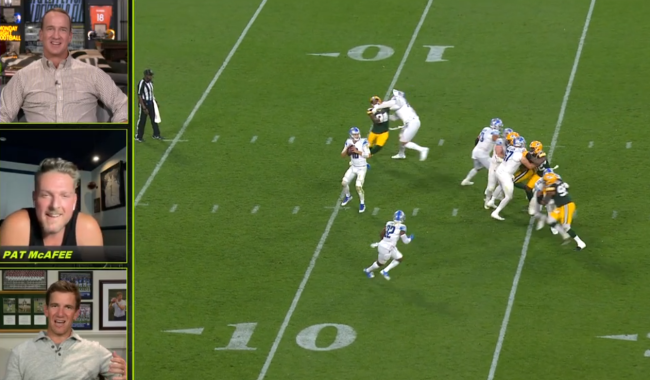 During his appearance, McAfee told his infamous Peyton Manning roulette story in which he says the QB perfectly predicted what number was going to come out while playing roulette at a casino.

Pat McAfee told a great story. Peyton once walked by him at a roulette table and said… "how about that red-18."
McAfee plays 18. It hits. From then on, McAfee treats every Peyton call as unquestioned genius.

After telling the roulette story, McAfee cursed while stating that he bets on every prediction Peyton makes.

Pat McAfee “I bet that son of a bitch was right” on ESPN 😂 pic.twitter.com/ogO0sxMZeN

The best part of McAfee’s appearance on MNF was when he was able to do play-by-play of Corey Bojorquez’s punt for the Packers in the fourth quarter.

Pat McAfee’s play by play of the Packers punt was absolutely electric pic.twitter.com/o24UBjEtBq

ESPN should have hired Pat McAfee on Monday Night Football when they had the chance.