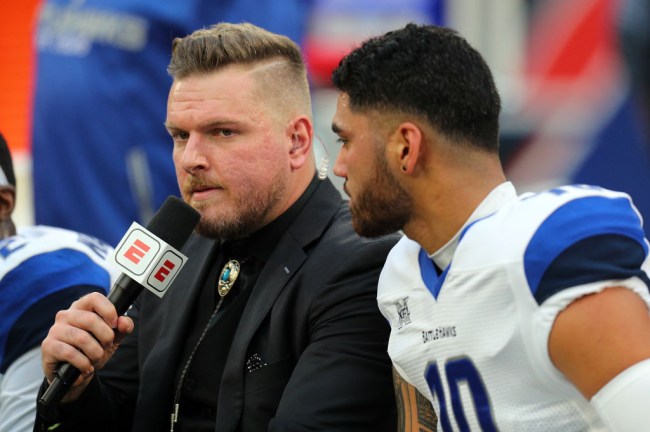 Anyone who decides to pursue a career as a punter does so knowing they’re signing up for a pretty thankless job, and while there’s no denying players at the position can play an incredibly vital role in a team’s success, their achievements go unheralded more often than not and they tend to only really become the center of attention when they screw up.

Punters also have to deal with their fair share of disrespect because their position isn’t exactly viewed as the most physically taxing one in existence, but in 2017, Pat McAfee stressed the toll football took on his body over the course of the eight seasons he spent with the Indianapolis Colts when he announced his retirement from the NFL.

Prior to hanging up his cleats, McAfee had managed to make more of a name for himself than virtually any other punter in history thanks to his hilarious personality, and after spending a couple of years honing his signature brand, he landed a broadcasting gig with ESPN last summer.

McAfee showcased his talents on the network during the most recent NFL and college football seasons, and over the weekend, he turned his attention to the XFL when the league officially rebooted after going belly up almost two decades ago.

There is perhaps no one on the planet who appreciates a good punt quite like McAfee does, and during Sunday’s game between the St. Louis BattleHawks and the Dallas Renegades, he got incredibly amped when former Raider Marquette King appeared to pull off an absolutely perfect 61-yard punt only to have it ruined by teammate Steve Beauharnais, who inexplicably dove on the ball to force a touchback.

As you can expect, McAfee wasn’t especially thrilled with the brainfart.

Someone check on @PatMcAfeeShow after this Marquette King punt 😆@xfl2020 pic.twitter.com/SIvJxCPz1o