Pat McAfee’s Performance At ‘NXT Takeover: WarGames’ Was Impressive As Hell – Here Are Some Of His Craziest Moments 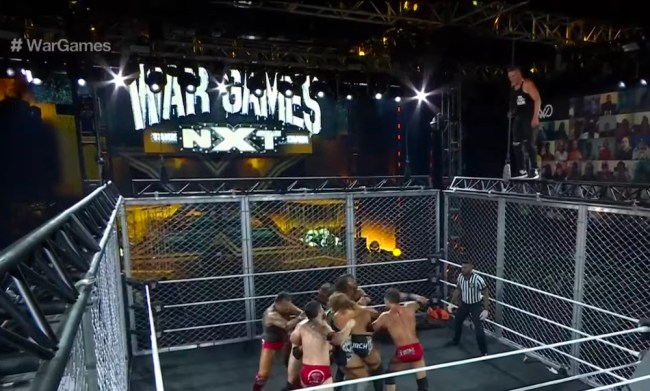 Over the summer, Pat McAfee became a thorn in the side of NXT star Adam Cole.

The feud kicked off on McAfee’s podcast after the former NFL punter called Cole “kind of small.” McAfee then appeared on an NXT show, mocked Cole for his height again, and punted him into the end zone.

McAfee’s performances were so good, former WWE Champion CM Punk tweeted that the former NFL All-Pro was the most interesting person on the show each week.

It's GREAT to be GREAT

It must SUCK to SUCK #WarGames #NXTTakeOver pic.twitter.com/AkYPtUkCBM

The rivalry culminated with a 4-on4 match at last night’s “NXT Takeover: WarGames” with the Undisputed Era coming out on top.

In many ways, McAfee stole the show, performing incredible moves for a guy with limited wrestling training.

Here are a few of McAfee’s insane moments from “NXT Takeover: WarGames” including a Swanton Bomb off the top of the WarGames cage.

How is your back doing, @PatMcAfeeShow? #NXTTakeOver pic.twitter.com/laBWyDuPoY

Them: @PatMcAfeeShow doesn’t belong in a wrestling ring.