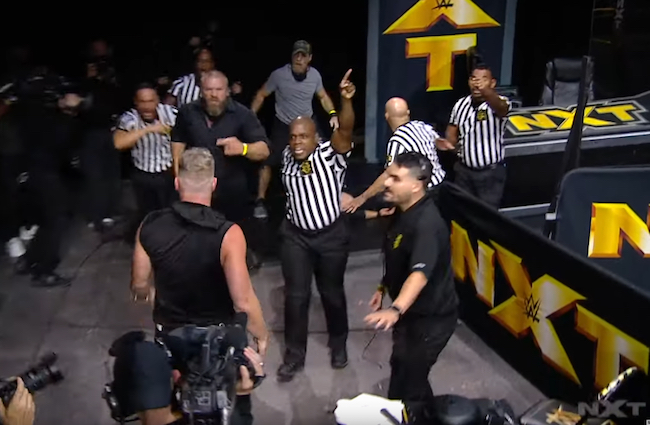 The former NFL punter was escorted out of the building after calling Cole a “tiny, itty-bitty, short, little bitch” and punting the former champion into next Wednesday’s show.

Last month, Cole stormed off the set of the Pat McAfee show after the Pro Bowl punter and NXT star got into a war of words which ended with McAfee calling the 6’0″ (wink wink) performer “kind of small.”

Pat tweeted photos of himself and Cole from earlier in the day that made it appear as though issues had been settled between the pair.

Hey @AdamColePro.. I’m thankful for the opp to chat.

I feel like the convo was something that doesn’t happen often anymore..2 people have a miscommunication, they talk about, can agree to disagree about some things & they move forward.

However, when McAfee joined the show to do commentary for the main event tag match between Cole’s Undisputed Era and Imperium, he continued to say disparaging remarks about the performer.

Near the end of the match, Cole confronts McAfee at the announce desk and challenges him to back up the talk. Referees and NXT officials – including Triple H and Shawn Michaels – keep them apart.

NEXT: Fight Club, Protestors, A Poisoning And A Few Other Insane Moments From ‘WWE Raw’