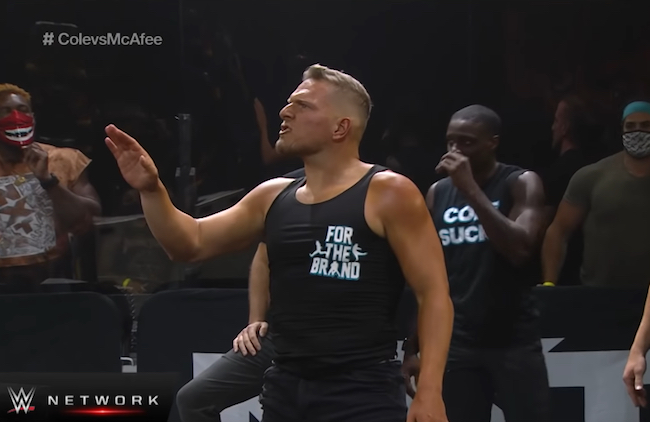 The feud restarted on McAfee’s show when Cole stormed off after being called short, got white-hot after McAfee punted Cole into the next county on an episode of NXT, and McAfee returned earlier this week to cut an impressive promo on the former NXT champion.

McAfee pulled out all the stops, nailing a Swanton dive to the outside, a backflip off the top rope, and even a sick looking punt kick to Cole.

In the end, Cole came out on top, besting McAfee to get the pinfall victory.

Shortly after the loss, McAfee reacted to his loss on Twitter with the perfect wrestling GIF.

During the call, the former WWE champion praised the performance of Pat McAfee, saying that the former NFL star told him he “wants to be a weapon for him” and that McAfee has every intention of becoming an NXT and WWE star.

McAfee’s performance on the show was better than most people probably expected and the former NFL player seems like he’s not giving up on wrestling anytime soon.