Pat McAfee Weighs In On Tom Brady’s Divorce As Only He Can, Says The QB Is In Uncharted Waters 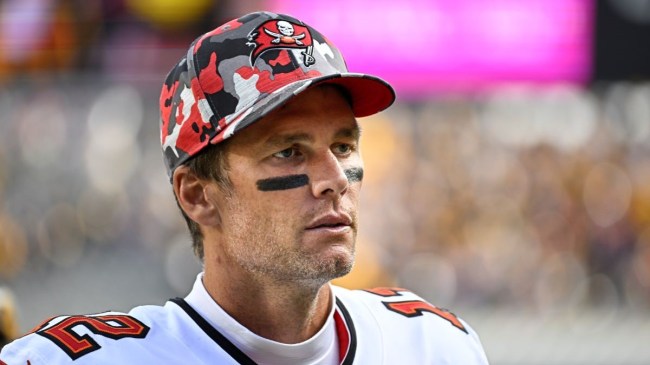 During the Friday, October 28 episode of his radio show — the morning after the Tampa Bay Bucs lost at home to the Baltimore Ravens on Thursday Night Football — former Indianapolis Colts punter Pat McAfee addressed Brady’s struggles as only he can.

Speaking of Brady’s 2022 season so far, McAfee makes the case that Brady is virtually in uncharted water as the NFL world has rarely, if ever, seen him struggle like this — both on-and-off the field — during his 23-year NFL career.

“He’s got a lot of s**t going on. I got nothing but respect and appreciation for what Tom Brady has done for the NFL and for the game. But I don’t think we can judge this Tom Brady off of previous Tom Bradys because this Tom Brady is going through some s**t that we ain’t never seen Tom Brady go through before and he’s f***ing 45-years-old,” McAfee said on the Friday, October 28 episode of his radio show.

“It sucks that we even have to talk about it, but it has to creep in — if you’re a human — into your workspace. And we just thought that Tom Brady is a robot. He’s a robot, he’s an alien, he’s a machine, he’s a winner. He’s Thomas Edward Patrick Brady III, or whatever the f**k it is. And he was a guy that we don’t understand or have any comprehension of. And now, it’s like maybe the most relatable thing of all time: he’s 45 years old, his arm seems to be struggling, and it seems like off-the-field he doesn’t have a perfect existence. It might be baby face for Tom Brady but it doesn’t help them on the field.”

As for what McAfee means by “baby face,” that’s a wrestling term used to effectively described “good guys.”

RELATED: This One Stat Proves Tom Brady Is In The Worst Stretch Of His Career In Two Decades