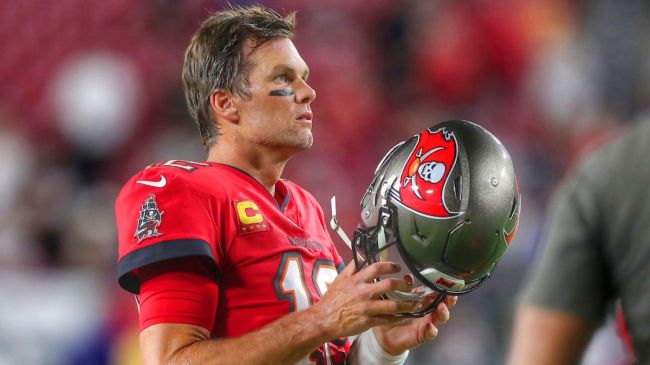 Tom Brady and the Tampa Bay Buccaneers fell at home to Lamar Jackson and the Baltimore Ravens by a score of 27-22 on Thursday night, dropping their record so far this season to 3-5.

This loss — following consecutive losses to the Carolina Panthers and Pittsburgh Steelers (certainly not the cream of the NFL crop, either) — means that future Hall of Fame quarterback Tom Brady is in the midst of his first three-game losing streak since 2002, when Ravens signal-caller Lamar Jackson was just five-years-old. Back in 2002, Brady was in just his second full season as the Patriots’ starter.

Brady went 302 consecutive starts without a three-game losing streak, almost doubling the previous record of 155 by Joe Montana according to the Amazon Prime Video broadcast. This season is bringing a few firsts in Brady’s 23rd season. Many of them aren’t the milestones Brady was chasing when he decided to end his brief retirement. [via Yahoo Sports]

Despite the fact that the Bucs sit at 3-5, the NFC South is so bad this season that both a game out of first place and last place in the division. Given that the Bucs’ NFC South competition is teams led by the likes of Marcus Mariota, Andy Dalton, and PJ Walker, they still should be able to win enough games to get into the postseason as division champs.

That said, the way the Bucs — who went into this season as one of the top three of four betting favorites to win the Super Bowl — have been playing in recent weeks makes it clear that even if they do make it to the playoffs, they won’t be making a very deep run.