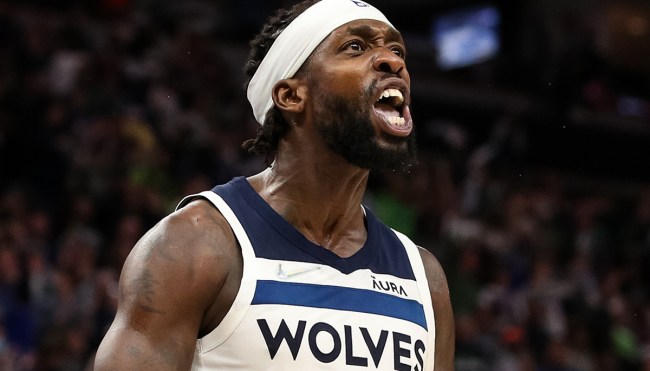 It shouldn’t come as a huge surprise that New York City has produced a number of NBA players over the years based on its sheer size alone, and while the massive metropolis may not be the hotbed of talent it once was, it’s long served as a proving ground for notable names like Kareem Abdul-Jabbar, Julius Irving, and Carmelo Anthony.

Most of the basketball players who hail from NYC honed their skills on the hundreds of outdoor public courts that dot the five boroughs—none of which are more notable than the iconic Rucker Park, which has hosted some truly legendary showdowns featuring some comparatively average players trying to hold their own against some of the biggest names on the planet.

You never know who’s going to show up when you head to one of those courts—which a group of players who recently gathered in Manhattan learned courtesy of Patrick Beverley.

On Friday, the Timberwolves guard dropped by the First Take set located under the shadow of the Brooklyn Bridge. It appears he decided to make a pit stop during his visit to the city at some point prior to that appearance, as a viral clip features Beverly playing a pickup game at “The Cage,” the name given to the court located right off the West 4th Street subway stop.

In the short clip, Beverley can be seen rocking white jeans and a tank top in a contest that ended with the Minnesota star hitting a game-winning three before dapping up one of his teammates.

0 parts of me are surprised someone caught Patrick Beverley playing pick up in white jeans at the 4th street park pic.twitter.com/JlyoGOOlAY

At least the losing team can take solace in knowing they fared slightly better than the tiny kid who had his shot swatted into another dimension after Beverley stopped by a different court last week.