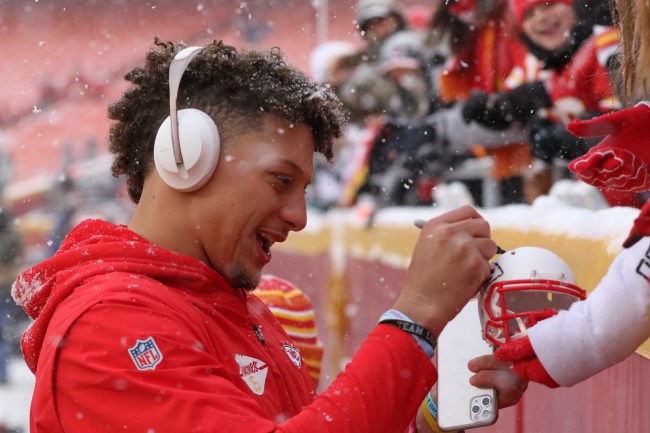 2020 hasn’t been so great, but, if you’re Patrick Mahomes, you’ve got absolutely nothing to complain about. From winning Super Bowl 54 in February to partying like a fucking rockstar while celebrating to, finally, signing the biggest contract ever given to a pro athlete, the Kansas City Chiefs quarterback has made life his actual bitch.

Given the fact that Mahomes is still just 24 years old, the sky’s the limit for the 2018 league MVP, so get ready to hear his name a lot over the next 10-12 years.

While the signal-caller is one of the most deadly people on the planet on a football field, apparently, there’s somewhere else Patrick Mahomes hands out L’s and embarrasses opponents; a beer pong table. That’s because, according to Pro Football Talk, via GQ, the night of the Chiefs’ Super Bowl parade ended with quite the night partying with rapper Post Malone, which included the stud quarterback pounding more than 20 beers throughout the day, and handing Malone a bunch of losses on the pong table — so much so that Post Malone had to get Mahomes’ autograph tatted on himself.

During a recent interview with GQ, Mahomes talked about the wild night of boozing to writer Clay Skipper, along with the details of Post Malone’s tattoo of his signature.

Mahomes and Kelce began to win, and Malone began to get upset; Malone told Skipper that the rapper is a “pretty f–king competitive beer pong player.” Malone kept changing partners in the hopes of changing his luck against Mahomes and Kelce.

Skipper explains that Malone’s manager said after nine or 10 games that it was time to start the show. Malone refused, wanting to win a game before ending the beer-guzzling marathon. At game 14 or 15, Malone asked Mahomes and Kelce to sign their names on a piece of paper, telling them he’d have their autographs tattooed on his body if they beat him again.

“He has a tattoo artist literally in the room,” Mahomes told Skipper. “I’m like, ‘Dude, you do not actually have to get a tattoo of our autographs.’” But Malone honored his promise and got the tattoos.

So between the Super Bowl parade and the Post Malone beer pong contest, how much beer did Mahomes drink that day? Skipper put the over-under at 20, and Mahomes said, “Way over.” With a caveat: “[H]alf the beers were on my clothes.”

This is absolutely ruthless shit, guys, and only adds to the legend of Patrick Mahomes. Dude’s out there throwing no-look dimes to receivers while in a dead sprint across his body and winning Super Bowls, and is such a badass that he’s making rappers get his name inked on themselves. These are the types of stories that stick around for decades. The ones that really define an athlete’s greatness.

Given the past 15 months or so that Mahomes has had, it’ll be interesting to see how he outdoes himself from here. Either way, what a wild ride it’s been for him so far.