Patrick Mahomes Catches Beers, Chugs Them, And Pours Them Down Travis Kelce’s Throat During The Chiefs’ Super Bowl Parade 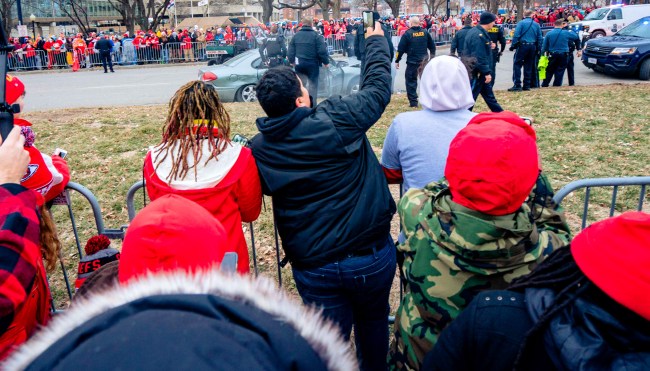 The Kansas City Chiefs’ Super Bowl victory celebration got off to a flying start Wednesday morning when a police chase broke out along the parade route, and didn’t slow down much once the celebration officially began.

Chiefs tight end Travis Kelce, in his best effort to live up to his brother Jason’s epic Super Bowl victory celebration back in 2018, proved early on that the Stanley Cup isn’t the only major sports league trophy that can be used to slam beers. The Lombardi Trophy also doubles quite well as a beer luge.

Once things actually got rolling, Kelce was still turning it up as he walked along beside the Chiefs’ bus and had his quarterback Patrick Mahomes pour a beer into his mouth from the upper deck.

Mahomes also proved that he is as adept at catching passes as he is at throwing them when someone tossed him a beer and chugged it, once again making Aaron Rodgers look like a sap.

The #ChiefsParade trifecta: @PatrickMahomes plus @tkelce and his belt 😂 pic.twitter.com/T5MUbkZG30

Of course, we would expect nothing less from a franchise where one of its players, Eric Fisher, went full Stone Cold Steve Austin while celebrating a touchdown during this year’s playoffs.

Dude fell out of a tree at the Chiefs parade w his ASS OUT 🤣🤣🤣 #chiefsparade pic.twitter.com/egCJwuwNdH