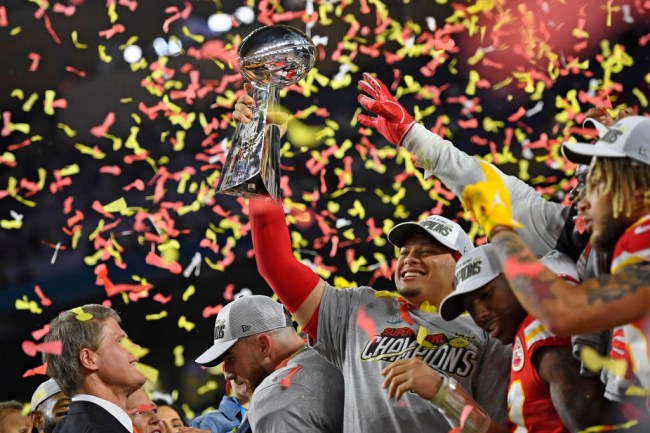 Sunday marked the first time in 50 years since the Kansas City Chiefs got to play in a game where the Lombardi Trophy was at stake, and after waiting for half of a century, the team and its fans finally got the chance to experience what it’s like to win a Super Bowl after the Chiefs erased a double-digit deficit thanks in no small part to Kyle Shanahan’s tendency to forgot how to call plays when he’s ahead in a Super Bowl.

After the game, the Chiefs kicked off the celebration by heading to a club in Miami (with the 49ers holding a party of their own because why the hell not?) and an almost assuredly hungover Patrick Mahomes eventually followed in the footsteps of the Super Bowl MVPs before him by throwing on a pair of sunglasses before taking part in a parade at Disney World.

On Wednesday, the people of Kansas City will get to witness a parade of their own (although they also engaged in their fair share of festivities on Sunday night and forced the city’s police department to remind them all crime was not suddenly legal).

It's a Super Bowl victory, not the purge.

The procession is slated to start at 12:30 PM EST but officials have spent the past day or so erecting barricades to keep the streets clear. While they may do a pretty good job of preventing pedestrians from making their way onto the parade route, they were apparently much less effective at stopping the car that broke through them while leading police on a chase on Wednesday morning.

The play by play here, MY GOD. pic.twitter.com/bfkU8Pk8cN

According to KSHB, the car contained two occupants and police suggested the driver may have been under the influence while speeding along a route that was already lined with fans.

The outlet also shared a few videos recorded by some of those people showing how the chase played out.

VIDEO: @kcpolice chase car down the parade route. Someone along the route shared this video with me. @41actionnews pic.twitter.com/iPCDMYowF3

Look at this video that was sent to us! The chase went right down the parade route. pic.twitter.com/sVHaaspTac

Here’s another angle of that chase – courtesy Justin Raines – who was along the parade route pic.twitter.com/Xiei9OuUKy

Crews are now towing the car from inside the barricades at the Chiefs Kingdom Parade. https://t.co/WEYbM9vQI3 pic.twitter.com/vSSUA0xaC5

That’s one hell of a way to kick off the celebration.