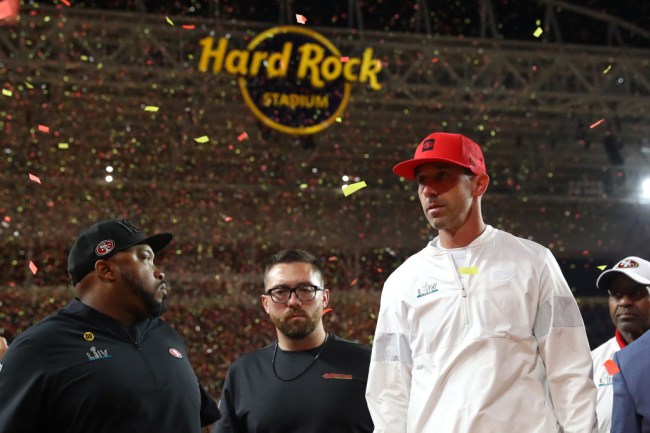 Kyle Shanahan is a good football coach, there’s no denying it, but that doesn’t mean he deserves a free pass when it comes to pointing out just how bad he and his teams have been during the 4th quarter of the Super Bowl.

He may be a 40-year-old that has coached in two Super Bowls already, one as an offensive coordinator and one as a head coach, but that isn’t the sort of thing people remember.

As the OC of the Falcons, Shanahan was on the wrong end of the most famous comeback in NFL history. Things looked great for Atlanta in Super Bowl LI as it headed into the 4th quarter with a 28-9 lead. We all know what happened after that as Tom Brady and the Pats woke up to score 25 unanswered and win the game.

Heading into Sunday’s Super Bowl matchup against the Chiefs, Shanahan already had that awful experience and memory under his belt and as the 49ers took a 10-point lead into the 4th quarter it was certainly San Francisco’s game to lose at that point, especially with how poorly Patrick Mahomes was playing.

It was their game to lose and that’s exactly what the 49ers did.

Both sides of the ball for the Chiefs flipped a switch while the 49ers fell flat as Kansas City scored 21 unanswered points during the final 10 minutes of the game to pull off the 31-20 comeback.

For those not keeping up here, this means in his two Super Bowl appearances, Shanahan’s teams have been outscored 46-0 during the 4th quarter.

Shanahan, again, is one of the top coaches in the NFL and the 49ers are built to continue having success, but that stat shows that something just isn’t clicking for him when it comes to coaching during the final quarter on the game’s biggest stage.

Now, of course, Shanahan isn’t a player on the field making (or not making) plays when needed, but at the end of the day, he’s lost two Super Bowls in rather brutal fashion.