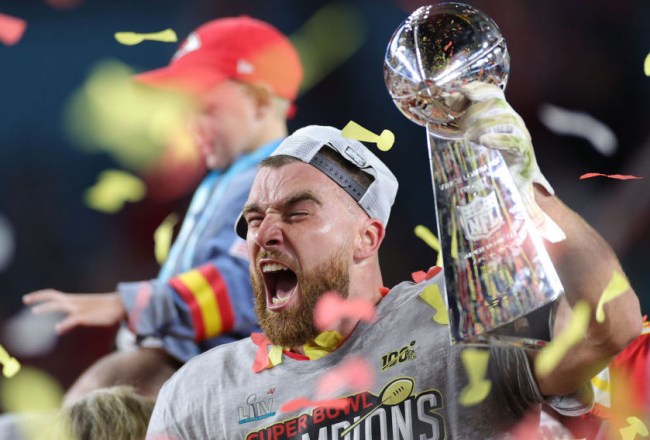 Every athlete dreams about winning a championship and getting to take part in the celebration that comes along with doing so and I’ll never forget the day my Little League team secured our plastic trophies and my parents let me get a large Blizzard at Dairy Queen to honor the occasion.

Sadly, I’ll never know what it’s like to win a championship on a national stage, and as a result, there’s no way I’ll be able to take advantage of the best part of taking home a professional title: being able to go on an absolute bender without anyone criticizing you.

There is perhaps no one who has ever taken advantage of the chance to engage in some judgment-free debauchery than Alexander Ovechkin, who once used the Stanley Cup to do a keg stand before tearing off his shirt and jumping into a fountain (which forced the NHL to think about banning the practice).

On Sunday, members of the Kansas City Chiefs earned the same hall pass when they topped the 49ers in Super Bowl LIV and wasted no time kicking off the celebration, as they quickly headed to a club in Miami Beach to get their drink on.

I’m not sure if Lord Stanley designed his cup so people could fill it with booze but it’s much more practical to use as a vehicle for drinking than any other championship trophy in existence. However, that didn’t stop Travis Kelce from using his recently-earned hardware as a vehicle for alcohol, as he posted a video of himself using the Lombardi Trophy as a beer luge on Tuesday.

Kelce is no stranger to pounding beers, as he was captured crushing a can while sitting with Patrick Mahomes during March Madness last year.

Mahomes hyped up and Kelce chugging a beer couldn’t be a better moment pic.twitter.com/cJaYZEtf5t

His teammate Eric Fisher also notably used a couple of bottles to channel his inner Stone Cold Steve Austin while celebrating a touchdown earlier in the playoffs, and while he ended up getting fined by the NFL for the stunt, I’m willing to assume his Super Bowl bonus will cover it.

I for one cannot wait to see how many players slur their way through a speech when Kansas City’s parade in honor of the Chiefs kicks off on Wednesday afternoon.