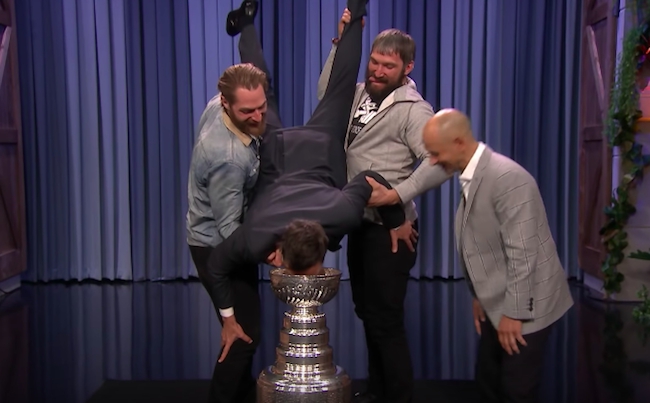 The Stanley Cup is easily the most iconic championship trophy in the sporting world and I’d argue there aren’t many things cooler than watching players hoist it above their head at the end of the playoffs— especially when they’ve waited their entire career to have their name engraved on one of the rings.

After a 43-year drought, the Washington Capitols took home Lord Stanley’s pride and joy this year and the team celebrated accordingly.

This was especially true of Alexander Ovechkin, who went on an absolute bender in the days following the team’s Finals victory— a celebration that included a shirtless dip in a fountain in Georgetown.

Of course, one of the things that sets the Stanley Cup apart from other trophies is the fact that you can drink out of it and Ovechkin took part in this age-old tradition in the best way possible: by recruiting fans to help him do a keg stand.

If The Washington Post is to be believed, the Capitols were the first team to use the trophy for keg stands but there’s a chance they might also be the last.

According to Bleacher Report, the buzzkills at the Hockey Hall of Fame weren’t exactly thrilled with how Ovechkin and the rest of the gang decided to celebrate and hinted they might formally ban the practice because no one is allowed to have fun anymore.

Philip Pritchard, who is one of the people responsible for keeping tabs on the Cup, shared his concerns, saying:

“We ask them politely not to do it. We’re trying to preserve the history of the Stanley Cup. We don’t want any unnecessary damage to it or a person, in case they drop the person or he presses too hard or something.”

In fairness, I can totally understand why the guy whose sole responsibility is protecting the Cup at all costs would be wary of the new practice but that doesn’t mean I’m not allowed to be mad about it.

If keg stands do end up getting banned, I hope the bros who made a Stanley Cup out of Natty Light cans would donate their trophy for a good cause.

A #stanleycup FOR THE PEOPLE!!! A trophy that brings friends together… 😂🍺 #ALLCAPS #FOX5CAPS pic.twitter.com/opoHGJfH1A

I know Ovi would appreciate the gesture.