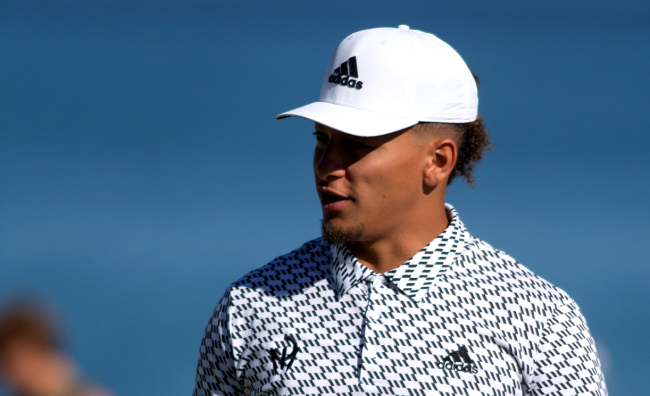 Kansas City Chiefs quarterback Patrick Mahomes is among the many celebrities participating in the American Century Celebrity Golf Championship this week.

He tees off on Friday at 10:17 a.m. in a group consisting of himself, Travis Kelce, and Justin Timberlake.

Prior to that, however, Mahomes was already at the Edgewood Tahoe Golf Course and on Wednesday had the chance to meet a diehard Chiefs fan.

The fan, dressed in a Kansas City Chiefs shirt, shorts and cap (covered by a Twins jersey? Mahomes’ dad did play for the Twins, but he wore number 20), shocked the star QB when he revealed a giant tattoo on his forearm of the quarterback in his full Chiefs uniform.

Patrick Mahomes met a fan with a huge tattoo of the quarterback on his arm, and he made it even better

“Signed this yesterday for this guy… dude has the signature tattoo on top of the other today.. #ChiefsKingdom,” Mahomes wrote about the video showing him signing an autograph directly over the fan’s tattoo.

Signed this yesterday for this guy… dude has the signature tattoo on top of the other today.. #ChiefsKingdom https://t.co/UUtLxzjwzM

This guy claims to be the Chiefs fan in the video, though the signature doesn’t exactly line up with the one Mahomes wrote in the clip.

Reactions to the unique autograph, and tattoo, were pretty entertaining.

“Just imagine how much that guy could sell his arm for now!” one person wrote on Twitter.

“A real fan would have cut his arm off, and framed it,” joked another.

That's a guy that is CONFIDENT in his QB 💪

This is why chiefs fans clear bills fans so easily

Several other big time Chiefs fans saw the clip and now want Patrick Mahomes to get his autograph tattooed somewhere their bodies as well.

“I need this tattoo in my life fr,” one fan commented.

Can I get you to sign my arm so I can get it tattooed on me also. Would love that! 🙌🙌🙌 Best QB in the NFL!