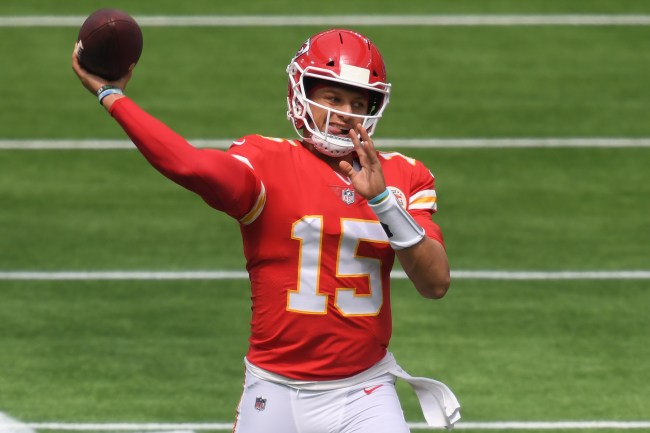 The Patrick Mahomes contract extension this offseason was the largest deal an athlete has ever gotten in professional sports, with the reigning Super Bowl MVP getting an absurd $477 million over 10 years from the Kansas City Chiefs. That said, if anybody deserves that kind of loot, it’s Mahomes, who, at age 25, has done things in the league that we’ve never seen before.

While the $477 million was a shocking number to see one single player get, what was even more surprising was that the Patrick Mahomes contract news was reportedly broken by a liquor store employee named Katie Camlin, who took to Twitter hours before the mainstream media sniffed the news, saying she witnessed a Chiefs employee come in and buy a bunch of champagne for a signing. Take a look below at the receipts.

Whoever that Chiefs employee was, remember this, “loose lips sinks ships,” so it’s best to keep your mouth shut on any future, record-breaking deals; regardless of how high up your position with the team is. However, for Katie’s intel into the situation, the organization did something pretty awesome for her, rewarding her with a bottle of Dom Perignon — the same champagne bought by that Chiefs staffer the day of the Mahomes deal — and a handwritten letter from the team’s GM Brett Veach, which was also signed by Pat Mahomes and defensive end Chris Jones.

After Plaza Liquor’s ⁦@katie_cammm⁩ spotted a Chiefs’ employee buying bottles of Dom Perignon and she became the first to report that a Patrick Mahomes extension could be coming, Chiefs’ GM Brett Veach sent her a bottle of Dom Perignon autographed by Mahomes and Chris Jones pic.twitter.com/HtGoEkzOPO

That’s a pretty fucking cool gift from the Chiefs, and one that Katie will undoubtedly hold onto forever; even if she initially didn’t want the attention after breaking the Patrick Mahomes contract news months ago, even saying it was overwhelming at first.

Im very overwhelmed and stressed out by the attention; I was worried about getting in trouble at work. Everything is fine but my anxiety is through the roof

Given the way Mahomes has played in the first two games of the NFL season, the $477 million deal appears to have been worth the investment for the Chiefs. And the fact that the organization had some fun by rewarding Katie with a surprise gift after her breaking news report is pretty dope, too.