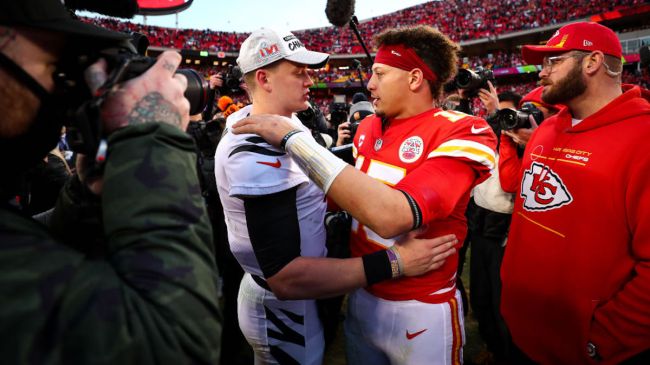 As a result of their wire-to-wire victory over the Buffalo Bills in their AFC Divisional round game on Sunday, the Cincinnati Bengals will head to Kansas City for a rematch of last year’s AFC Championship game this weekend.

Immediately following the Bengals’ 27-10 win over the Bills, Patrick Mahomes — who led the Chiefs to a victory over the Jacksonville Jaguars in the divisional round despite suffering a high ankle sprain — took to Twitter to send a simple message to the Bengals ahead of their upcoming rematch.

The message was simple but effective: an emoji of a clock.

Following the game, while speaking to CBS’ Tracy Wolfson, Burrow also had a message of his own, as he told the NFL to send out refunds to whoever bought tickets to the potential neutral-site-located AFC Championship game between the Chiefs and Bills:

At the time of this writing, Las Vegas bookmakers are currently split on the potential outcome of the game as both teams’ odds are currently at an even Pick ‘Em.

Over in the NFC side of the NFL playoffs, the #2 seed San Francisco 49ers — who beat the Dallas Cowboys in the divisional round — will head to Pennsylvania to take on the #1 seed Philadelphia Eagles (who stomped out the New York Giants last weekend) in the NFC Championship game.

Super Bowl LVII will be held on Sunday, February 12, at State Farm Stadium in Glendale, Arizona.