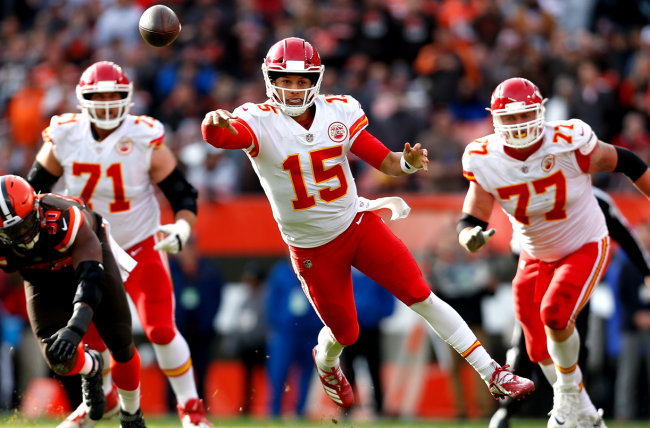 On Monday, for the ninth time, Mike Sando of The Athletic has released his NFL “Quarterback Tiers” rankings.

The rankings are based on his survey of 50 NFL coaches and executives made up of six general managers, eight head coaches, 10 evaluators, 12 coordinators, six quarterback coaches, seven execs whose specialties include analytics, game management and the salary cap, and four members of one team’s personnel department.

The quarterback tiers rank 35 veteran quarterbacks from Tier 1 (the best) to Tier 5 (the worst).

The names at the top of the list, Tier 1, are ones fans probably would expect to see, but the order of the quarterbacks was determined by one thing almost no one expected.

According to the rankings, “A Tier 1 quarterback can carry his team each week. The team wins because of him. He expertly handles pure passing situations. He has no real holes in his game.”

So, naturally, fancy tattoo aficionado Aaron Rodgers is a Tier 1 quarterback. In fact, he is the number one overall quarterback on the list.

It would have been a tie for the top spot with Patrick Mahomes though, if one veteran defensive play caller didn’t have the Chiefs star ranked as a Tier 2 QB.

“We love Mahomes because of his unorthodox throws, not because of his natural pocket presence,” the defensive play caller said. “And when that disappears, that is when they lose games. I don’t think that is a 1. I think that is a 2. Nothing against the guy. I love the kid. But take his first read away and what does he do? He runs, he scrambles and he plays streetball.”

So, according to this guy, Patrick Mahomes is a one-read quarterback. If this is true (and it’s really not), just imagine how good he will be when he figures out how to go to his second and third reads.

After all, being just a “one-read” quarterback has worked out pretty well, after all, with a Super Bowl win, a MVP award, almost 19,000 yards passing with 151 touchdowns to just 37 interceptions over four seasons (plus one game as a rookie).

Is Patrick Mahomes just a one-read quarterback? Most fans don’t think so

“Tom Brady can win games, sure. But until he steps onto the field without any teammates and single-handedly posts a 17-0 regular season record, it’s hard seeing him as a 1. Relying on teammates to make plays means he’s a good 2.”

- overheard during a thanksgiving football game, from that uncle with the questionable Facebook memes.

Sounds like he should be easy to stop then according to this coach.

Must have a lot of first reads open then

So by this flawed logic, if Mahomes is able to stop being a one read QB then he'll throw for 10k yards per year.

By the way, the other Tier 1 quarterbacks in the rankings were Tom Brady, Josh Allen, Justin Herbert and Joe Burrow.

Geno Smith of the Seahawks was the only Tier 5, while Drew Lock was the last QB ranked on Tier 4. Good luck this season Seattle.