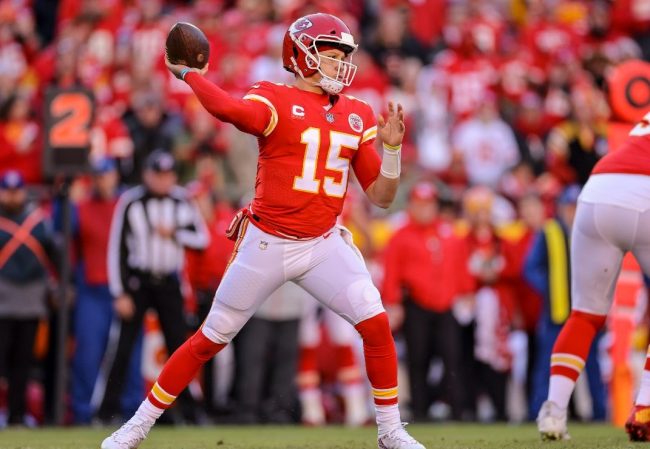 The Kansas City Chiefs are set to be one of the best teams in the league once again with Patrick Mahomes leading the way. All eyes have been on Olrando Brown Jr. though, as the star left tackle has been negotiating an extension. He has yet to agree to a new deal, however, it sounds like Mahomes is playing a vital role in Brown returning to the Chiefs training camp.

Patrick Mahomes Is The Leader The Chiefs Need

According to Aaron Wilson, Patrick Mahomes played a huge role in convincing Orlando Brown Jr. to return. Essentially, the Chiefs’ star quarterback informed Brown that it is time “to get back to work.” It’s a subtle phrase but it clearly reminisced Kansas City’s top asset on the offensive line.

Patrick Mahomes encouraging him to get back to work was a big factor in Orlando Brown Jr. reporting to training camp, per a league source

The Chiefs should be extending Brown soon with the regular season right around the corner. On Tuesday, Orlando Brown Jr. was humming a different tune than we’ve previously seen, per Chris Roush. After months of negotiating a new deal back and forth, Brown aims to be in Kansas City for the remainder of his career. That bodes well for Patrick Mahomes, as he would have a consistent left tackle protecting his back.

“I want to be here for the rest of my career.”

Orlando Brown Jr. talks about his contract conversations and despite not signing an extension yet, he said he wants to finish his career in Kansas City. #Chiefs pic.twitter.com/pZjztYQraX

If this isn’t a great example of leadership then I don’t know what is. Mahomes was able to talk Orlando Brown Jr., one of the team’s main offensive contributors, into returning to Kansas City. The star left tackle is still negotiating a contract extension, however, he’s at least back in practice in the Chiefs training camp.

With Patrick Mahomes under center, Kansas City will likely be a contender for years to come. Having Orlando Brown Jr. back in the lineup surely helps the Chiefs for their hopeful title run late in the 2022 season.