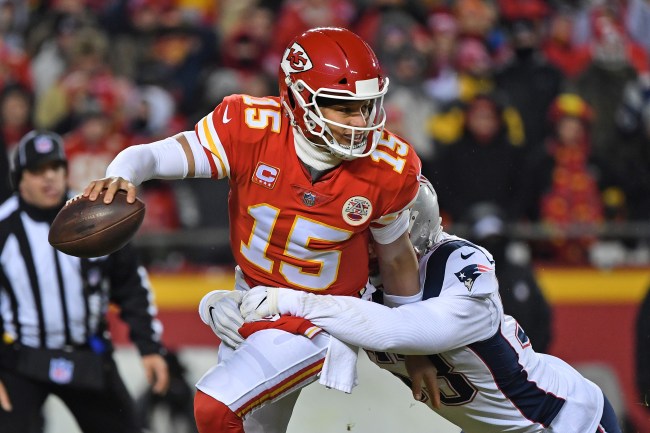 In his first full season as a starter, Patrick Mahomes threw for 50 touchdown passes, led the Kansas City Chiefs to the AFC’s No. 1 seed and is, presumably, on his way to winning the NFL’s MVP award, so, needless to say, the team isn’t regretting handing him the keys to the franchise this past offseason by parting ways with incumbent signal-caller Alex Smith. And, after taking over the league with his insane passing skills, it’s no wonder plenty of people are expecting huge things from the 23-year-old.

One of those people singing the praises of Mahomes is Tom Brady, who went out of his way following this past weekend’s AFC Championship Game to give a more personalized message to the Chiefs quarterback. Following the Patriots win — which sent them to their ninth Super Bowl of the Brady-Bill Belichick era, here’s what the five-time Super Bowl champ, Brady, had to say about Patrick Mahomes to Peter King, via NBC Sports.

“I just went and saw him,” Brady said, per NBC Sports’ Peter King. “I mean, he’s feeling like you think he’d feel when you lose a game like this. It hurts. He’s a hell of a … I mean, what a great young player. So impressed with his poise, his leadership. He is spectacular.”

To hear someone as great as Tom Brady use the word “spectacular” to describe another quarterback is pretty high praise, so Patrick Mahomes is in rare company.

While Brady was gushing over Mahomes’ talent to King, we just found out from the Chiefs’ young signal-caller as to what the GOAT actually said to him in that private meeting following the AFC Championship Game, which required some security guards to escort the two of them into a room by Kansas City’s locker room.

Joining the NFL Live set at the 2019 Pro Bowl in Orlando, Patrick Mahomes said Brady wanted to give his fellow quarterback some advice for the future, as well as tell him how much he respect his game. Here’s what Mahomes had to say, per NBC Sports.

“I think it was a little bit of both,” Mahomes said to ESPN analyst Tedy Bruschi, who asked him about the interaction. “It was such a great game with so many emotions where it was going back and forth at the end. He just came up to me and was kind of giving me — saying, ‘Good game,’ and everything like that.

“I mean, he was in my place. He was young. He got to win the Super Bowl in his first year with you (Bruschi) and everybody, so he understands that time flies by and (told me) to make sure to put in the work. And I think he saw that I’ve put in the work to be in those situations.”

Patrick Mahomes isn’t entirely right about the timing of Tom Brady’s first Super Bowl win — with it actually coming in his second season in the league — but it was the future Hall of Famer’s first season as a starter, so there are plenty of similarities given Mahomes’ success. That aside, the advice from Brady is pretty awesome, as it does seem like yesterday that he was captivating the sports world with his story from sixth-rounder to Super Bowl champ and, now, to the GOAT.

This reminds me of the time Tim Duncan consoled a young LeBron James after his Spurs beat James’ Cavs team in the 2007 NBA Finals, telling him that the league will be his soon. It’s not just respect, but a passing of the torch, so to speak. Take a look at that interaction from 2007 below.

Like Duncan did with James back then, Tom Brady made sure to tell Patrick Mahomes that he appreciates great competition and a once-in-a-generation talent, which is the ultimate sign of respect from someone of such stature. Good on you, Brady, because the advice is probably something that’ll stick with Mahomes throughout his career.