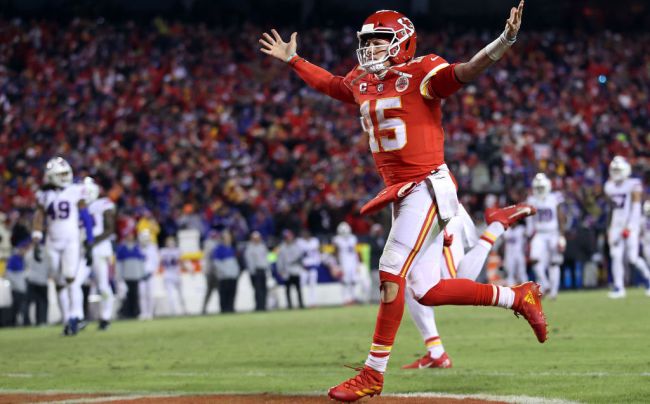 While recency bias is always a factor in these things, much of the sports media world has spent the days following Sunday’s epic divisional round matchup between the Kansas City Chiefs and Buffalo Bills hailing the game as one of the greatest in NFL history.

Certainly more than most cases, the Chiefs-Bills game actually does lay claim to being one of the greatest games in the history of the sport, as the 25 points that were scored in the last two minutes of regulation were the most in the NFL history.

Unfortunately for the Bills and their fans, though, despite the valiant efforts of otherworldly quarterback Josh Allen, they were ultimately bested by the Chiefs, who had the benefit of possessing perhaps the league’s best player right now, Patrick Mahomes.

Not only is Mahomes wildly talented and experienced for a 26-year-old, but he’s also inarguably one of the league’s most clutch players, which is a notion that’s evidenced by this mindblowing stat: the Kansas City Chiefs are 3-1 in the playoffs with Patrick Mahomes when their in-game win probability dips below 5%, while the rest of the league in 1-38 in those situations since 2018.

The Chiefs are 3-1 in the playoffs with Patrick Mahomes when their in-game win probability dips below 5%.

Mahomes and the defending AFC Champion Chiefs will look to book their tickets to their third Super Bowl in as many years on Sunday when they host Joe Burrow and the young Cincinnati Bengals.

According to the bookies, the Chiefs are the current favorites to win Super Bowl LVI, which will be played at SoFi Stadium in Los Angeles on Sunday, February 13, 2022. As of this writing, the Chiefs boasted +110 odds to lift the Lombardi Trophy, followed by the Los Angeles Rams at +175, the San Francisco 49ers at +450, and finally the Cincinnati Bengals at +800.