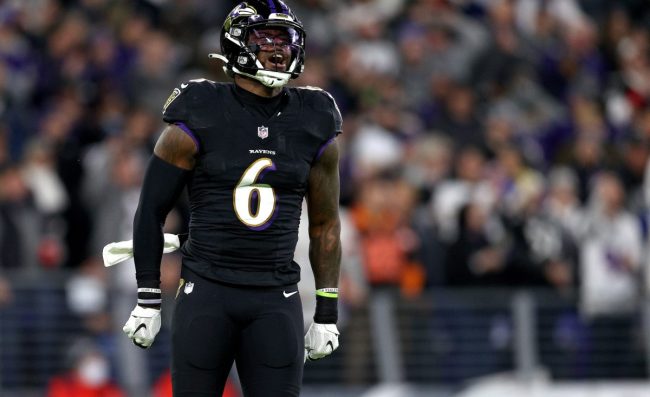 Ravens’ linebacker Patrick Queen is attempting to lose the entire fanbase one Old Bay related tweet at a time. The former first round pick gave his opinion on hot sauce Tuesday morning and he’s sure to rile up some Maryland locals.

Queen posted a picture of Old Bay hot sauce on Twitter, with the ‘throwing up’ emoji in the caption.

Old Bay is a staple in Baltimore, being created in the city way back in 1939. If you’ve ever seen the movie Wedding Crashers, you’ll remember the classic line, “Crab cakes and football! That’s what Maryland does!”

Old Bay is an important ingredient to those delectable snacks, but it’s not just for seafood. Marylanders use the seasoning on popcorn, vegetables, chips, eggs, french fries, boiled peanuts, and pretty much anything else imaginable.

The hot sauce is great for those that want the Old Bay flavor with a little kick.

But apparently, Queen is tossing his OB in the trash, and becoming Public Enemy No. 1 among Ravens’ fans in the process.

Queen has never been one to hold back his opinions, but his latest could lose him some supporters.

Now, it’s important to remember where Queen is from. The defender hails from the great state of Louisiana, which is famous for seafood in its own right.

But Queen isn’t playing for the hometown LSU Tigers any longer. And his current fans have been quick to respond to his Old Bay criticism.

You and @marlon_humphrey sitting around deciding who wants to be public enemy #1 pic.twitter.com/kssDz7M9Rr

Some may have gone as far as to block the Baltimore linebacker.

Queen has been vocal about other Maryland staples, too. He says that he prefers Louisiana crawfish to crabs every day of the week.

Queen isn’t winning over any friends off the field. Hopefully his play on the gridiron helps make up for it.