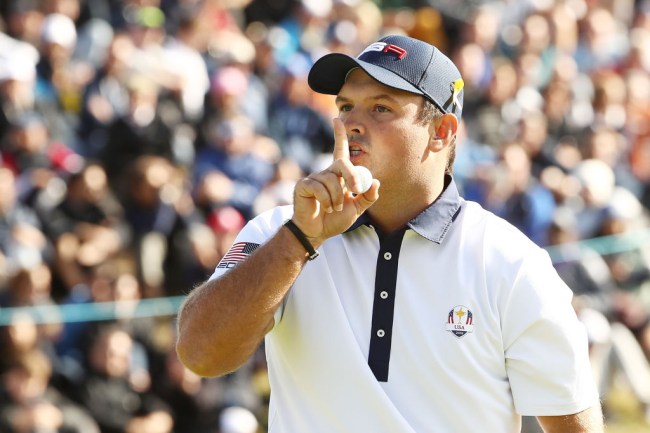 You would think if you performed like Patrick Reed did in the 2018 Ryder Cup that you might want people to forget about your poor play as fast as humanly possible. You would think that, because you are a rational person with rational thoughts. But that ain’t the Reed way, by God. Oh no, Patrick Reed and his wife and his in-laws don’t want to wave those Men In Black, memory-wiping sticks in your face. They want you to never forget the 2018 Ryder Cup. More importantly, they want you to know that Jim Furyk is a moron and Jordan Spieth is a baby who didn’t have the team’s best interests in mind.

Let’s look at a quick timeline of events, shall we?

– First we had a Justine Reed burner account spitting out hot fire while the Ryder Cup was going on.

– Next we had Reed claiming he was going to blow up the post Ryder Cup presser similar to the way Phil Mickelson did in 2014. At the same time he tore into Jordan Spieth and Jim Furyk

– Then we had a non-playing member of the US Team call Patrick a liar, saying he “begged to play with Tiger.”

– Now we have Patrick Reed’s mother-in-law, Janet Kessler Karain joining the party and HOOOO BOY does she have a lot to say.

Early today, Kessler Karain took to Facebook to respond to this Golf.com article questioning if Reed’s post Ryder Cup behavior would hurt his standing for future team events. She took a SUBSTANTIAL amount of umbrage with the contents of said article and she aired it out on Facebook.

Here are some highlights… 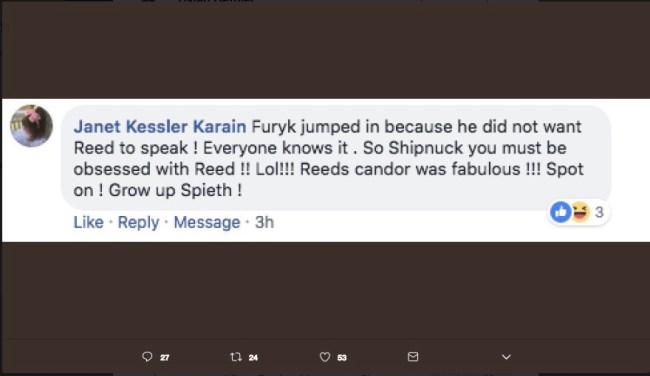 For the record, Shipnuck (Alan Shipnuck) didn’t even write the article she is so furious about. 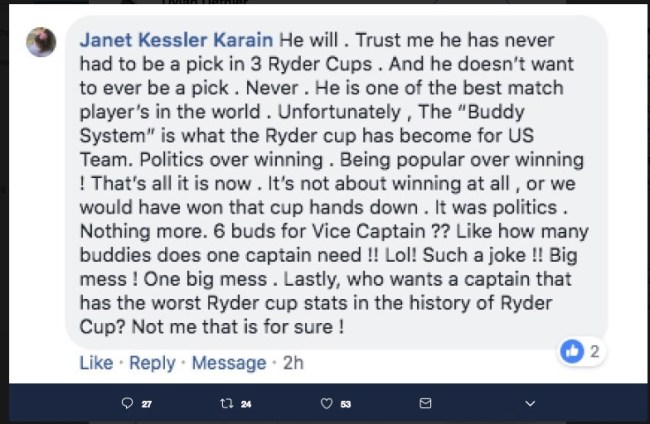 Guess she doesn’t think Phil Mickelson or Tiger Woods should ever captain the U.S. Team in a Ryder Cup either. Because if you want to talk about piss poor Ryder Cup records, those two are so bad they are practically co-MVPs for Team Europe. 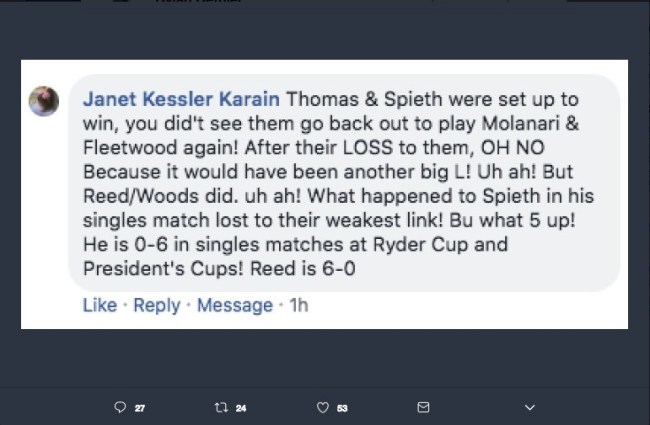 Does she know that the pairings in the Ryder Cup, unlike the President’s Cup, are random and it was just terrible luck her son-in-law had to play Fleetwood/Molinari twice? I DON’T THINK SHE DOES!

While Kessler Karain tried to mostly kept things civil, I found these two comments to be laughable on every level. 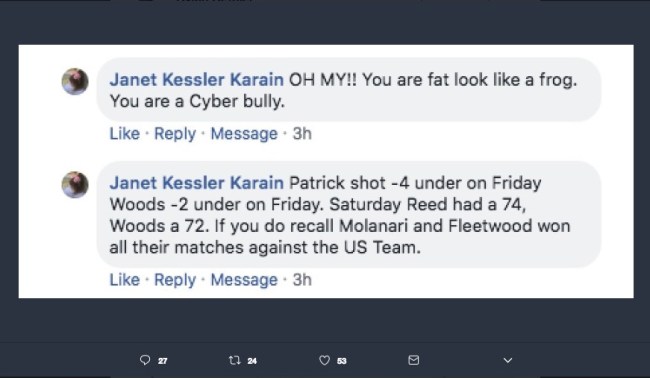 Not sure what is more offensive, her calling someone a “fat frog,” or her having the audacity to suggest Patrick Reed shot anything less than an 85 in his Saturday four-ball round.

Like I said, these are just a few highlights. Head over to Golf.com’s Facebook for the full show. And read Josh Berhow’s article here. It’s worth your time.