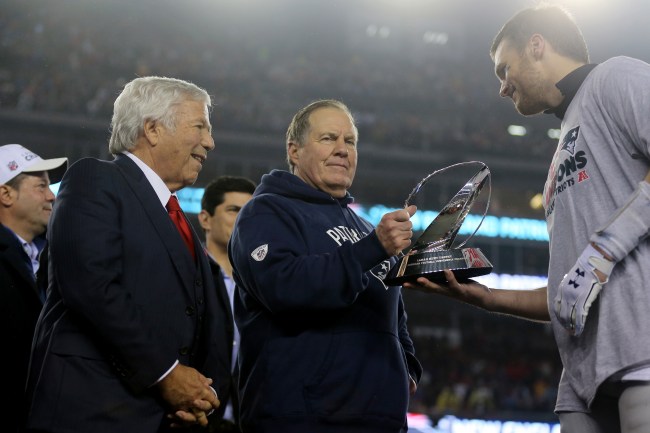 ESPN journalist Seth Wickersham made enemies with an entire region today when he released what many Patriots fan believe to be a “hit piece,” detailing alleged friction between the franchises three most powerful figures: Belichick, Brady, and owner Robert Kraft. The piece goes so far to offer the possibility of this year being the last year the trio will be intact.

Patriots fans immediately took to the Wikipedia page of Wickersham and did not mince words when revising his credentials.

Patriots fans have been doing a number on Seth Wickersham's Wikipedia page pic.twitter.com/VzVd7Z3whc

“Seth Wickersham” aka “fiction sports writer” is an American fiction novelist. He is a fake news writer for ESPN and ESPN The Magazine. Seth has written many hit pieces on the Patriots in the past few years such as warm Gatorade conspiracies, spying on the Seahawks practice prior to Super Bowl 49, and a billboard that shows New England’s sideline replays. Before becoming a fake news writer, he spent his entire time whining for attention.”

Here is an earlier version:

Seth Wickersham is an American football fiction novelist. He is a senior writer for ESPN and ESPN The Magazine. He never played organized football, but once broke his ankle (talus) kicking the laces in 8th grade PE. He is a known Raiders fan and wears their pajamas to bed.

Seth was made aware of all the backlash and had this to say:

“I knew they were going to do it. I think there is a nervousness. … This has been a difficult, difficult year.”

Me, the Patriots fan: 13-3, #1 seed, first round bye, home field advantage throughout playoffs. Real tragic season. Imagine setting a bar so high, these achievements seem trivial. God what a boner this guy is.

Me, a casual observer: Despite Brady’s continued dominance, he inevitably cannot sustain it much longer. Why was Guerrero exiled from the sidelines? Why did we clear our deck by trading both Jacoby Brissett and a possible future franchise QB in Handsome Jimmy G? Is Belichick boning Gisele? Can jet fuel melt steel beams?

Ultimate Take Away: The Patriots are in a great position to compete for another Super Bowl title. Brady is healthy. Gronk is healthy. The defense has really started clicking. I’ll be damned if I’m going to let some needle-dicked journalist cite anonymous sources and try to derail an Empire. Because ultimately, even if Belichick, Brady and Kraft are fighting urges to murder one another, they can all find common ground in one overpowering urge conveniently left out of the ESPN piece: an insatiable thirst to win.

And for that reason, I can sleep easy.