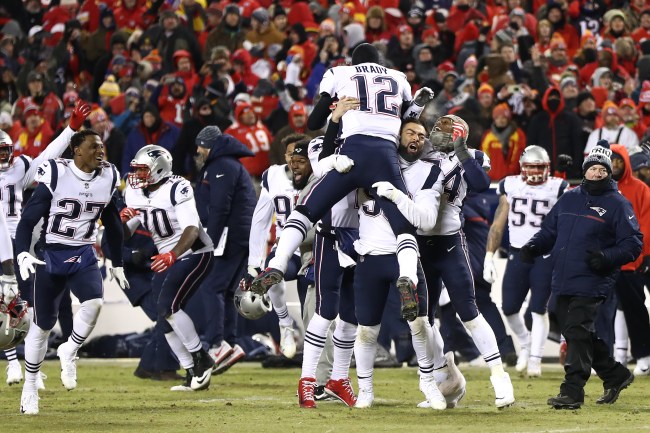 The Patriots are heading to their third Super Bowl in a row, their fourth in the last five years, and their NINTH in 17 seasons under Tom Brady. At the risk of sounding like a spoiled little prick to anyone who doesn’t think Tom Brady poops blood diamonds, this one feels particularly special. Maybe it’s because the laws of physics suggest we shouldn’t be here. Or because Tom Brady is 72 years old. Or because Rob Gronkowski has had more invasive surgeries than Joan Rivers, but always graciously does what’s needed of him. Or because Brady’s sixth ring would tie Jordan and make him the only player in NFL history to win that much hardware. Or because of this:

Patriots fans aren’t naive enough to believe that their unprecedented reign is infinite. It will end, and only then will the haters (of which there are many) view how incredible this unfathomable run has been with a sober eye. If this is the last year in the Patriots tank, it would be poetic. On February 3, 2002, the Patriots beat the Rams in Super Bowl XXXVI to begin their run. On Feb. 3, 2019, the Patriots will face the Rams in Super Bowl LIII, 17 years later.

This one has special significance, and could be the perfect bow on a two-decade gift of football supremacy. Can you put a price on that? One Pats fan can…

Meanwhile, I have a panic attack if I lose $100 betting on any given Sunday.

I legit laughed out loud at this subtweet: