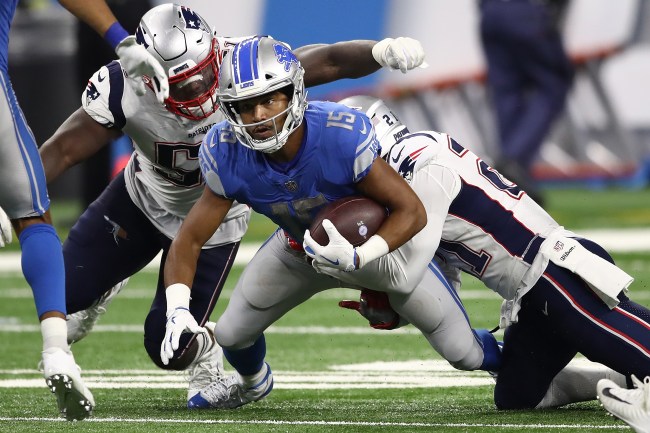 -Golden Tate in January, speaking about his upcoming free agency.

Flash forward two months and the 30-year-old signs with a team who went 5-11 last season, gave up their most electric player, and whose roster construction is an absolute mess.

The Patriots have a reputation of letting the other 31 teams shoot their loads during free agency while they let the dust settle and mechanically and rarely glamorously add pieces to their roster. Thursday reports indicate that the New England signed five players Thursday.

At this point, Patriots Nation knows better than to question their Sith Lord, and have acquired an “In Bill We Trust” attitude. With that said, with the exception of the Michael Bennett signing, Massholes are chomping at the bit to acquire a big name. Or just someone they could identify out of a lineup.

As the free agency deadline neared, Patriots fans were all but convinced Golden Tate would be their newest shiny toy. The enthusiasm was palpable…

First look at Golden Tate in a Patriots uniform. Photoshop creates endless possibilities and it is incredible. Please do not steal, this took a lot of effort, thank you. pic.twitter.com/w8dZ6qmcs8

WHEN THE FUCK IS GOLDEN TATE SIGNING WITH THE PATS

Insane edit of wes welker and golden tate on the patriots rate my work pic.twitter.com/Qt6L2yEaKc

There is a reason it’s so quiet on Golden Tate pic.twitter.com/wk8T3GZvew

When 4 pm hits, I believe Golden Tate will be a member of the New England Patriots, signing a 3 year deal 👀

GOLDEN TATE IS A PATRIOT

Welp, Golden Tate, a man who claimed he was hungry to win, went to an organization who was 5-11 last year and shows no sign of knowing what the fuck they’re doing.

All of Boston’s reaction can be summed up in one short clip:

Golden Tate to the Giants pic.twitter.com/G1IJYYtOa5

Thought and prayers out to Patriots Nation.