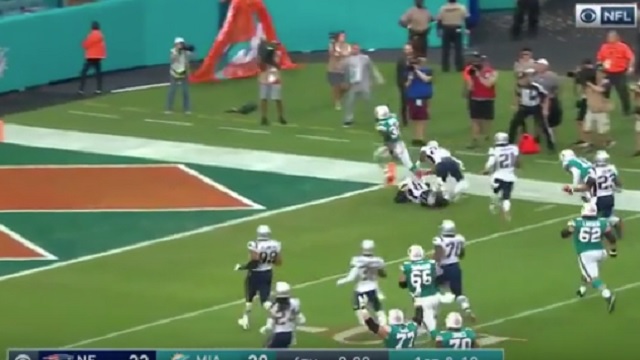 With 15 seconds left on their own 25 and down 5 points to the Patriots it seemed like the Miami Dolphins were doomed but they somehow pulled off the play of the season to beat their longtime rivals at home.

Watch as the Dolphins pull off multiple laterals for what is now being dubbed the Miracle in Miami.

This will go down in @miamidolphins history…

The Internet had some hilarious reactions to the play.

Putting Gronk out as a safety just in case a one-legged Tannehill can throw a 75-yards-in-the-air Hail Mary also might be the dumbest moment of the Belichick era.

That was the dumbest Patriots loss of the entire Belichick era.

Bill Belichick really had Gronk as a safety because he thought Gase was going to throw a hail Mary and ended up with Gronk getting g shook out his shoes by the much faster Drake.

The fact that this happened to Bill Belichick's #Patriots — makes this even crazier. https://t.co/sXiH7ZndaI

Thoughts and prayers to all the reporters who are gonna ask Bill Belichick questions at his postgame press conference.

Genius of Belichick to have Gronk as the deep safety there. LOL.