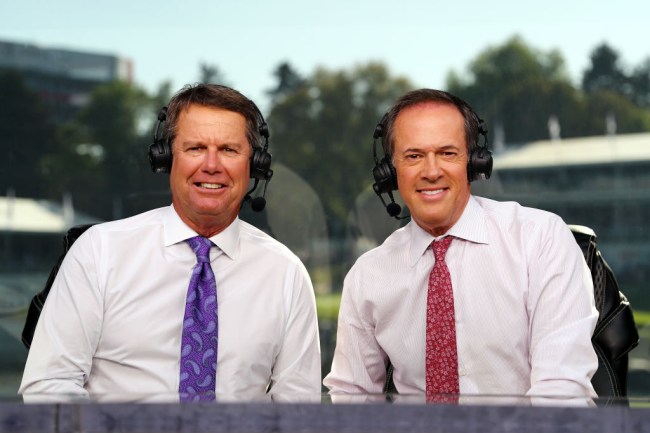 This story has been updated below with Azinger’s response.

Heading into Sunday’s final round at the Honda Classic, the top of the leaderboard featured three Englishmen. Tommy Fleetwood, who has yet to win on the PGA Tour, held a one-shot lead while both Luke Donald and Lee Westwood, neither of which have won on the PGA Tour since 2012, were tied for second.

Early on during the NBC broadcast, Paul Azinger tried to stress how big of an opportunity this was for Fleetwood to finally get that monkey off of his back but the wording he used was, well, not great.

“There’s a lot of pressure you know, you’re trying to prove to everybody you’ve got what it takes and these guys know you can win all you want on that European Tour, the international game and all that, but you have to win on the PGA Tour.”

Putting the word ‘that’ in front of European Tour was bad enough, but then he went on to say ‘the international game and all that’ which came across like he was downplaying the European Tour. Azinger wasn’t done there, however, he continued with his ‘the PGA Tour is basically all that matters’ take.

“Westwood took offense to that actually yesterday when asked about that. Two wins on the PGA Tour but he’s all, ‘Oh I’ve won 44 times all over the world,’ but it’s not the PGA Tour, though.

And they know that and I think Tommy knows that. It puts a little pressure on Tommy — but this is where they want to be, isn’t it? They want to come here, they want to prove that they can win at this level.”

A good example of why I wouldn't advise watching PGA Tour golf with the sound on pic.twitter.com/rQEHjY5cTa

While plenty of people immediately took to Twitter to roast Azinger, Ian Poulter was the most notable to call him out for his remarks and was also quick to point out the fact that the Europeans have dominated the Ryder Cup as of late winning seven of the last nine over the Americans.

I like @PaulAzinger a lot. And get on with him great. But Paul please do not condescend or disrespect the @EuropeanTour and our players like that. We have slapped your arse in Ryder Cup for so long 🏆🏆🏆🏆🏆🏆I know you captained a win but seriously that was embarrassing today.

While Azinger’s wording and delivery of the message he was trying to get across was bad, there’s no denying that he has a point. And while Poulter has dominated Ryder Cups over the years, it’s worth noting he’s only won three times on the PGA Tour in 275 career starts.

More and more European players, particularly the best in the game, are playing a majority of their events on the PGA Tour. The field in nearly every PGA Tour event is much stronger than almost every European Tour event which means that it’s also that much more difficult to win on the PGA Tour, that’s just a fact.

As for Fleetwood, he wasn’t able to earn his first PGA Tour win on Sunday after finding the water with his second shot on the 72nd hole handing him a third-place finish.

According to models from DataGolf, Fleetwood’s two wins at Abu Dhabi in 2017 and 2018 equate to ‘a lower-tier PGA Tour event’ and his 2017 French Open win equates to ‘a bit worse.’

Azinger is someone that tells it like it is and will never shy away from giving his honest opinion. And while plenty of European Tour players and fans will continue to show frustration toward him, the only angle they should really be taking against Azinger is how he said what he said and not the actual message he was trying to get across.

UPDATE: Azinger responded on Monday to the backlash he’s gotten about his comments and said that he and Poulter texted back and forth afterward.

“I wasn’t trying to be malicious. I didn’t mean to disrespect anyone,” Azinger told Golfweek. “But professional golfers choke for two things: cash and prestige. And the PGA Tour has the most of both.”