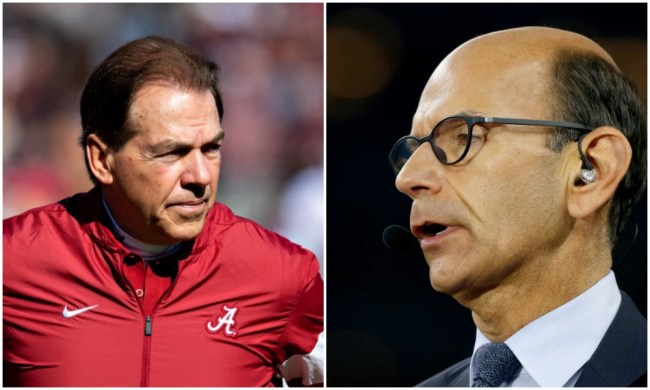 After allowing 48 points and giving up 647 yards to Ole Miss two weeks ago, there were some serious question marks surrounding Alabama’s defense. Typically one of the best defense in college football, it was almost as if college football fans didn’t know how to react to the Tide getting torched by one of the worst teams in the SEC.

Well, Alabama’s defense answered those questions on Saturday by giving up just over 400 yards to No. 3 Georgia and shutting out the Bulldogs in the second half en route to a 41-24 win.

Alabama’s defense looked like a completely different unit against Georgia compared to what it showed against Ole Miss just a week prior and for Paul Finebaum, he thinks that Nick Saban’s positive test earlier in the week may have had something to do with the changes we saw.

Saban tested positive on Wednesday before ultimately turning in three consecutive negative tests and being cleared to coach on the sideline on Saturday. Nevertheless, Saban wasn’t able to be around his team the Wednesday, Thursday, and Friday leading into the game, which may have given him an opportunity to really figure things out on the defensive side of the ball.

“Maybe when (Nick) Saban was home Wednesday, Thursday and Friday, he got a little more active in the defense, and I’m not saying he wasn’t already because I’ve had coaches tell me and I know they’ve told you, it’s ultimately Nick Saban’s defense,” Finebaum said during an appearance on WJOX 94.5 on Monday. “Who’s to say he didn’t pick something up, he probably had a little more time to study film than he does normally.”

Finebaum’s theory here isn’t crazy at all, it makes a lot of sense, actually. Alabama’s defense is Saban’s defense, it’s not defensive coordinators Pete Golding’s, Saban has the first and last call regarding that part of his team.

Whatever the case may be, Alabama’s defense appears to be back after its dominant second-half performance against Georgia.