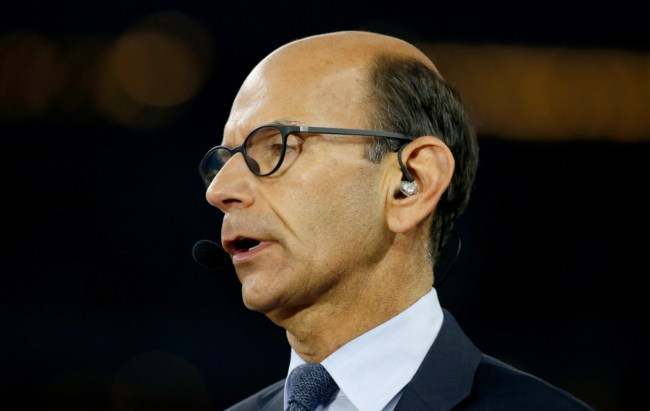 We’ve seen Nick Saban be passive-aggressive, condescending, and negative with the media over the years, but we’ve never seen anything like what we saw out of the Alabama head coach on Wednesday night.

Saban went on the rant of all rants about NIL, specifically calling out both Jackson State and Texas A&M for buying players.

Saban had tip-toed around the idea of A&M buying recruits but clearly couldn’t hold his tongue any longer.

Paul Finebaum, like the rest of the college football world, was shocked by Saban’s comments.

“For Nick Saban, the greatest coach of all time, to go public and accuse one of his biggest rivals of essentially cheating – although that’s open for interpretation – is really stunning,” Finebaum explained on Thursday’s edition of ‘Get Up.’

“He has insinuated this in the past, but one thing you have to remember about Nick Saban, is he’s always complimentary towards everyone else, even when you know it’s passive-aggressive. But this was way off script.”

"For Nick Saban, the greatest coach of all time, to go public and accuse one of his biggest rivals of essentially cheating … is really stunning. … This was way off script." pic.twitter.com/v63m6wazED

It didn’t take long for Fisher to respond to Saban’s comments. He called a press conference on Thursday morning and took direct shots at Saban calling him a narcissist.

“We never bought anybody, no rules were broken, nothing was done wrong,” Fisher said on Thursday. “The way we do things, the ethics of the way we do things, and these families, it’s despicable that a reputable head coach can come out and say this when he doesn’t get his way.”

“The narcissist in him doesn’t allow those things to happen, and it’s ridiculous when he’s not on top.”

The October 8 meeting between Texas A&M and Alabama can’t get here soon enough.