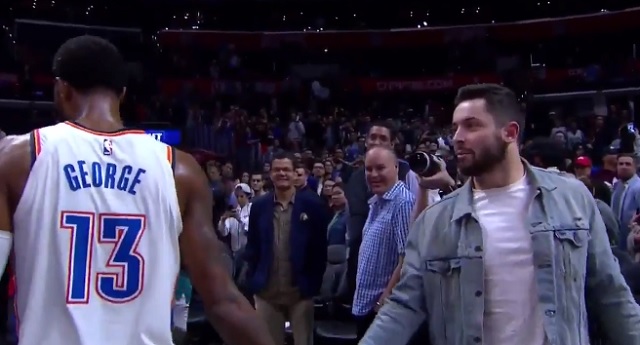 Via The Norman Script

He’s been a stud, I’ve been following up on him being here in Oklahoma, and he just has that ‘it’ about him as far as being a leader,” George told reporters . “He holds everybody accountable, and he’s always ready.”

It’s one of the reasons George isn’t ruling out a national championship run for OU.

“I think so. I’m not just saying that being here in Oklahoma. I think honestly, been watching them, their offense is explosive, and their defense is underrated. So, I think they definitely got a shot at winning it all.”

While George seems to be a big fan of Mayfield he apparently is unable to recognize the Heisman QB out in public. Last night, George and Mayfield exchanged this extremely awkward encounter after last night’s Clippers-Thunder game.

After the video of George failing to recognize Mayfield went viral, the OKC star took to Twitter to apologize to the Sooners QB.